JAFI Board of Governors meets in Paris for first time 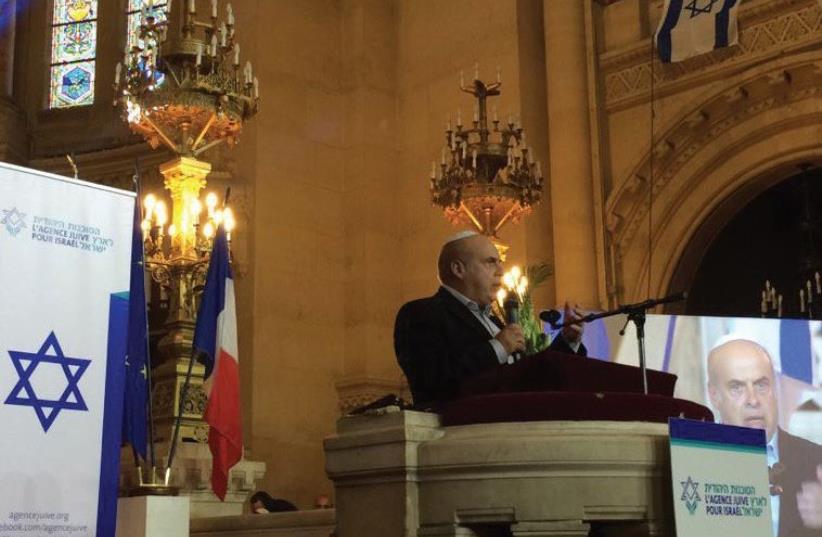 JAFI head Natan Sharansky wishes success yesterday in Paris to French Jews about to make aliya.
(photo credit: JAFI)
Advertisement
PARIS – Arab immigration to France and deep-seated anti-Semitism in that country mean French Jews have no future there, the head of the Jewish Agency for Israel said here Monday.Natan Sharansky made this declaration in the French capital, where he was attending the three-day Jewish Agency for Israel (JA FI) Board of Governors meeting, held in Paris for the first time ever as a sign of solidarity with French Jews.Hundreds of Jewish leaders from around the world took part in the JA FI meeting, which ended Tuesday. They paid tribute to the courage and Zionism of the French Jewish community.The leaders saluted the 15,000 French Jews who have immigrated to Israel in the last two years, and expressed solidarity with European Jewry in general, and French Jewry in particular, for the terrorist attacks experienced during that time.Since 2012, Islamists have killed eight Jews in two shooting attacks that came amid hundreds of nonlethal violent assaults. A French citizen with alleged ties to Islamist groups is standing trial in France for a third shooting in 2014 at the Jewish Museum of Belgium, in which four people died.“There is no future for the Jews in France because of the Arabs, and because of a very anti-Israel position in society, where new anti-Semitism and ancient anti-Semitism converge,” Sharansky told JTA .Joining Sharansky, who opened the JA FI gathering, were Minister of Immigrant Absorption Sofa Landver and Minister of Construction and Housing Yoav Gallant, who both also addressed the participants. On the French side, Minister of State for Relations with Parliament Jean-Marie Le Guen took part, alongside leaders of the French Jewish community.“Our annual meetings take place as a rule in Israel, but every two years we hold a board meeting in the field, strengthening ties with Jewish communities around the world. After the Hyper Cacher attack [in January 2015], we made the decision to come to Paris instead of Mexico City, as a sign of solidarity with the local French community,” Alan Hoffman, CEO of the Jewish Agency in Israel, told The Jerusalem Post.During the Shabbat preceding the board meeting, some 20 CEOs of Jewish American federations stayed with Jewish families in the Paris suburb of Sarcelle – home of a vibrant Jewish community which has suffered in past years some anti-Semite attacks, Hoffman added.“We met in Sarcelle many Jews who are considering their future and the future of their children in the country. On the other hand, it’s a very strong and proud community which we can learn a lot from. They have grown up with Muslims, and at times are confronted with issues of radicalization, but there is a real understanding of the need to build bridges and coexist,” he said.These sentiments were shared by many of the participants. Dov Ben-Shimon, CEO at the Jewish Federation of Greater MetroWest, New Jersey, told The Jerusalem Post that spending the Shabbat in Sarcelle was inspiring, with so many of the Jews there strongly tied to Jewish community life and to Israel. “After the attack in Hyper Cacher, we joined the effort of supporting the French community; in spirit and also in financing some of the security systems in Jewish schools and institutions. This is our way of expressing solidarity with the community here,” he said.JA FI head Sharansky said security has become a key concern for French Jews. “It is not necessarily a feeling of being threatened, but mostly of feeling uncomfortable in a place which is your home,” he said. “Jews in France, in liberal Europe, are confronted today with feelings of hatred and with a new sort of anti-Semitism.They are often confronted with opposition to Israel as the homeland of the Jewish people. In some places in French Jews are afraid to wear the kippah. They don’t feel secure in their own liberal France.”Sharansky added that over the past two years the Jewish Agency has greatly expanded its activity in France. “We have now a team of 30 people here, capable of taking care of 15,000 immigrants. At the moment, we have some 9,000 people interested at some level in immigrating to Israel. Within just a few years the Birthright project grew from zero to 2,000 students visiting Israel, and the numbers keep growing. We must concentrate our efforts in resolving issues such as recognition of diplomas, assisting those immigrants who are middle class in acquiring apartments and opening more ulpanim for youngsters and students. The demand is impressive,” he said.Minister Yoav Gallant echoed Sharansky’s words. “France is the third largest Jewish community in the world, size wise, and the community here is confronted with anti-Semitic waves. The essence of the Jewish spirit is the link between the people living in Zion and Jews around the world. We are here today to emphasize that Israel will support the French Jewish community on the one hand, and assist those who wish to come to Israel on the other. Jews here have suffered attacks directed both at the liberal values of France, and specifically against them. Israel will stand firm against terror of both forms.”Herve Levy, chair of Marseille Keren Hayesod, told The Jerusalem Post that his community was touched by the decision of the JA FI to hold their annual meeting in France. “Their arrival here brings us together. The French community has gone through two difficult years, though the situation in Marseille is perhaps better than in other places in France. Here we co-habit with our Muslim neighbors and have always kept an open and constructive dialogue with them.’’ The JTA contributed to this report.