Jewish activists are helping families separated at the border

A broad spectrum of Jewish groups have spoken out against the policy, along with many other religious organizations.

A Mission Police Dept. officer (L), and a US Border Patrol agent watch over a group of Central American asylum seekers before taking them into custody on June 12, 2018 near McAllen, Texas
(photo credit: JOHN MOORE/GETTY IMAGES/AFP)
Advertisement
When Mary McCabe explains America’s immigration courts to children who have been separated from their parents, she tries to make it interactive.She draws a sketch of a courtroom and asks kids to identify the figures in the room — like the judge or the lawyers — and where they sit. For younger ones, ages 6 or 7, she brings a box of crayons and a sketchpad for doodling. Older kids sometimes play with a toy that drips colored oil into water. Anything to give them a little diversion from her discussing why they are apart from their parents — and what happens next.“I’ll bring along art supplies that they can use so when we talk, they don’t have to stare at me and talk. They can talk while they color,” said McCabe, an immigration attorney with HIAS Pennsylvania, an independent Jewish refugee aid organization that’s a separate partner of the national agency HIAS.“Even the older kids, talking about something that’s upsetting, they can play with that and it helps them be less upset,” she said of the water toy. “If they can play and have something they’re fiddling with, it can be easier to talk sometimes.”HIAS Pennsylvania is one of the Jewish groups actively aiding families that have been separated at the southern US border under a new government policy dictating that every illegal migrant who crosses the United States border will be prosecuted and detained. Since children cannot be prosecuted with adults, they are reclassified as unaccompanied minors and taken away, either to mass children’s shelters or foster homes. More than 2,300 children have been separated from their parents, according to The New York Times.Critics of the policy say forcibly separating parents and children indefinitely is traumatizing and draconian. Government officials — like President Donald Trump and Attorney General Jeff Sessions — say it’s a necessary measure to enforce border security.On Tuesday, Sessions called comparisons of family separation to Nazi actions “a real exaggeration.McCabe and her colleagues have counseled a dozen separated children now living in a shelter in Pennsylvania about their legal rights, the process of seeking asylum and how they may be able to see their parents again. She has counseled children ranging in age from 6 to 15.“One 7-year-old girl said, ‘My mom can’t talk to me, she doesn’t have a phone now, she can’t talk to me,’” McCabe recalled. “Some of the older ones are also really suffering. … They were fleeing gang or domestic violence, and they often came with their parent because their parent was also afraid. A lot of times the older kid is afraid the parent will be deported.”A broad spectrum of Jewish groups have spoken out against the policy, along with many other religious organizations. Some Jews, on the southern border and elsewhere, are working to provide physical or legal assistance to migrants, or to organize other local Jews to speak up.“Obviously Jews had a history of immigration and of moving when sometimes they haven’t wanted to, and having to find places where they’re welcome,” Mayor Jonathan Rothschild of Tucson, Arizona, told JTA. His city is 60 miles from the border.“There’s also a moral faith that follows religion,” the Jewish lawmaker said. “You can’t but have your stomach turned by the stories that we hear.” 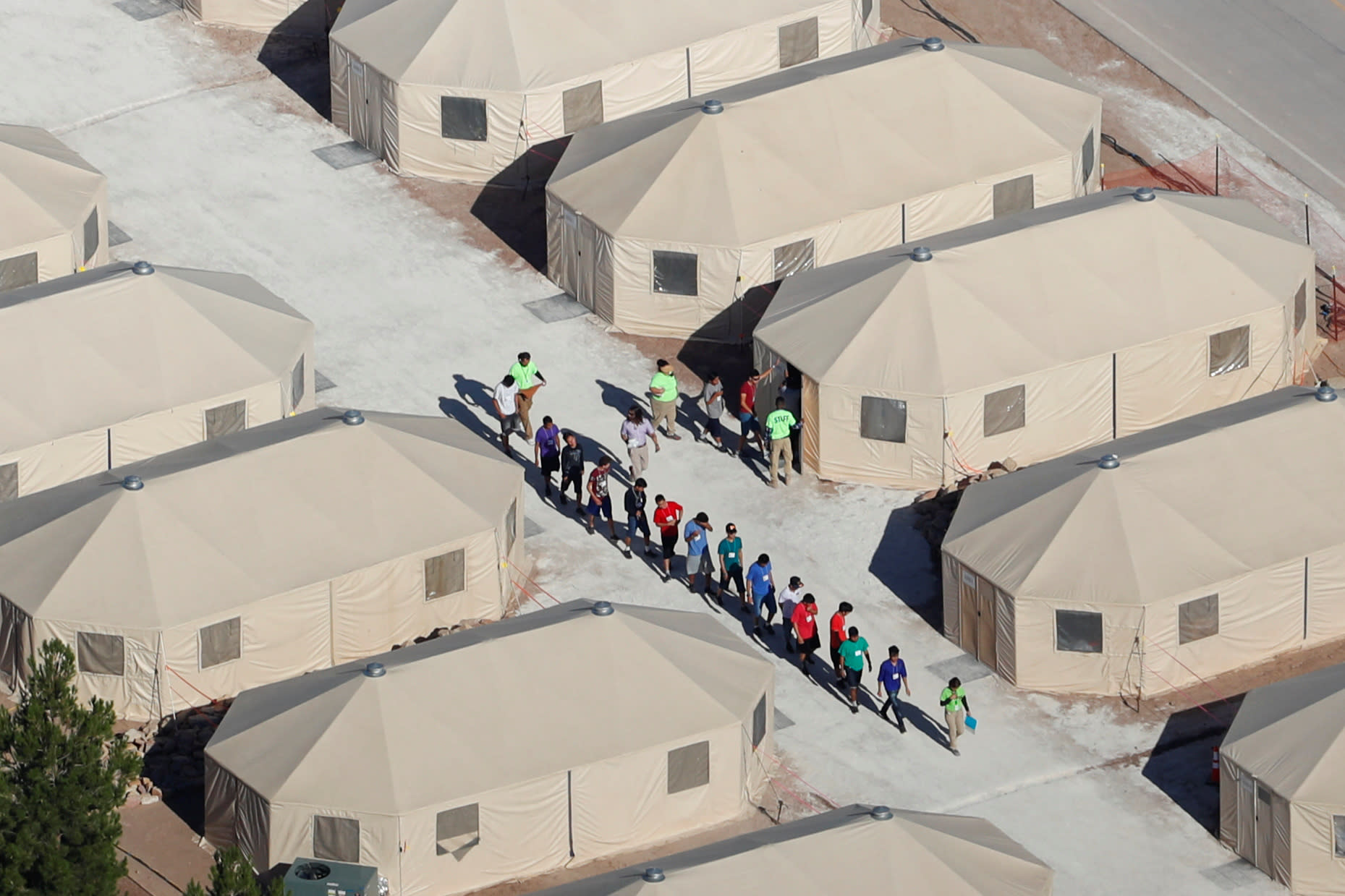 Immigrant children, many of whom have been separated from their parents under a new "zero tolerance" policy by the Trump administration, are being housed in tents next to the Mexican border in Tornillo, Texas, U.S. June 18, 2018. (REUTERS/Mike Blake)Last week, 27 Jewish groups — including, in a rare show of unanimity, the leadership of all four major American Jewish religious movements — signed an open letter to Sessions decrying the policy, saying it “undermines the values of our nation and jeopardizes the safety and well-being of thousands of people.”“I haven’t seen anything like this in this field since the first executive order came out,” said Mark Hetfield, president of the national HIAS organization, referring to the January 2017 travel ban on seven Muslim countries. Nearly all major American Jewish groups opposed that policy as well.Rothschild, a Democrat, said that because family separation is a result of federal policy, there is not much he can do directly as Tucson’s mayor to hinder it. But he signed a joint letter this month with the mayors of Los Angeles, Houston and Albuquerque, New Mexico, calling the policy “cruel,” “morally reprehensible” and “utterly inconsistent with our values of decency and compassion.”Although Arizona as a state has a history of strict immigration legislation, Rothschild says his constituents largely oppose the family separation policy.“We have a community where so many people have friends, family and relatives who live on both sides of the border,” he said. “In Tucson, the overwhelming consensus is that these are bad policies.”One of Rothschild’s constituents is Alma Hernandez, a Mexican-American Jewish woman running this year for the Arizona House of Representatives. Hernandez, 24, who resigned as the coordinator of Tucson’s Jewish Community Relations Council to run for office. This year, perceiving a lack of progressive political action from the established Jewish community, she co-founded the activist group Tucson Jews for Justice, which plans to participate in rallies against the separation policy and other issues.“These are people that are our neighbors. It’s a little frustrating sometimes, especially right now,” Hernandez said.Not all local activism in the protection of immigrants involves working against the government. Bob Feinman, a New York City transplant and retired longtime broadcaster on Tuscon’s Spanish-language radio, is vice chair of Humane Borders, which places water tanks near the border so that migrants don’t die of dehydration after they cross over.The group works with border security forces to ensure that its tanks can be installed and maintained in the most useful locations. Humane Borders also works with Mexican aid workers to urge families south of the border not to cross illegally due to the dangers that may await them in the United States — including family separation.Speaking personally, Feinman said he is “shocked beyond belief” by the policy.“We can agree to disagree and save a whole lot more lives,” he said.Regarding potential migrants, he added, “We beg and plead with them to talk people out of crossing the border illegally. The stories they get about how easy it is are false. We try to convey to them that it is not worth the risk, whether it’s over a regular border crossing or through the desert.”McCabe said that she understands the decision to take the risk to cross the border after hearing stories of the gangs and violence that threaten families in Central America. While she is not Jewish, she says working for a Jewish organization has made her even more aware of the need to provide a safe haven to families seeking asylum.“What happened in the 1930s and ’40s has had an impact on our asylum system,” she said. “That’s partly why we have this asylum system. The Jewish community cares that people who are being targeted for persecution have a way to be safe because people died. I feel like I’m just stating the obvious.”