Participants will bring in Shabbat together, share a potluck dinner and take a group photo to upload to social media with the hashtag #ShabbatAgainstDemolition. 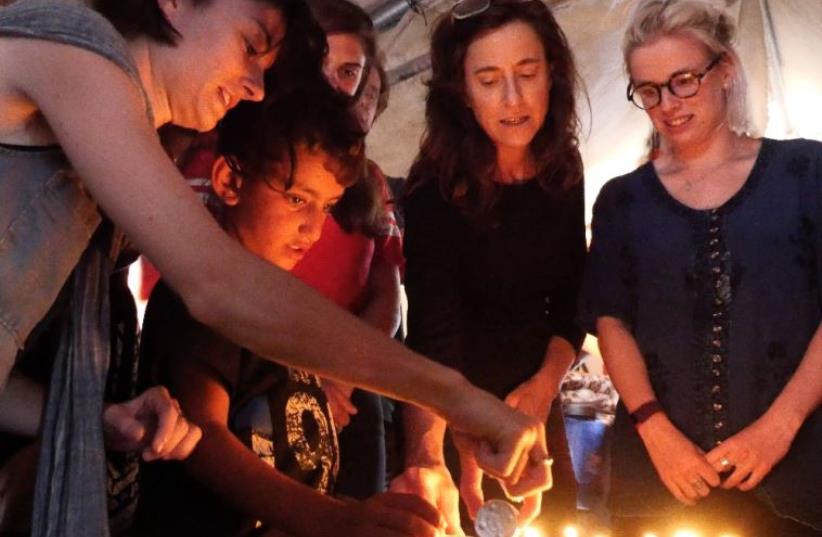 Jewish peace activists light Shabbat candles in Sussiya
(photo credit: JACK BROOK)
Advertisement
Jewish activists around the world are preparing to take part this weekend in a “global Shabbat against demolition” of  Palestinian villages.Event organizers say the initiative is a response to a plea by residents of four Palestinian communities – Al Arqib, Umm el-Hiran, Umm al-Khair and Sussiya – who say the demolition of their villages is imminent.Last week, the High Court of Justice ordered Defense Minister Avigdor Liberman to issue an opinion on the demolition of Sussiya within two weeks.People from Israel, the UK, the US, Canada and Australia are taking part in the Shabbat initiative.“As Jews, we say emphatically that forced displacement, dislocation and demolition do not represent our values,” said a joint call to action put out by the anti-occupation collective All That’s Left, the Center for Jewish Nonviolence (CJNV) and the T’ruah organization.“These demolitions represent a continued policy of systematic discrimination. As members of a people who have experienced expulsion, persecution and dispossession, we stand with all Palestinian communities facing eviction,” their statement said.Israeli activists are planning to spend Shabbat at Sussiya, as they did a month ago.“It’s important for me as a member of an international anti-occupation organization to stand with them. They know [that] international pressure, Jewish and non-Jewish, is a key component of their ability to continue to thrive and exist,” Israeli organizer Erez Bleicher of All That’s Left and CJNV told The Jerusalem Post.“This global response really represents a movement for justice that will continue to advocate non-violently for a more sustainable reality in which Palestinians can live with dignity and full rights,” Bleicher added.The event is expected to take different forms from community to community, with some resembling more traditional demonstrations and others comprising Jewish study sessions.In Melbourne, organizers will shape their Shabbat around the “social-justice lens of Judaism.”Participants will bring in Shabbat together, share a potluck dinner and take a group photo to upload to social media with the hashtag #Shabbat Against Demolition.They will also hold discussions about the demolitions.The groups involved include Hashomer Hatza’ir and the Australian Jewish Democratic Society.Australian organizer Carly Rosenthal, who visited Sussiya and other Palestinian villages last month with CJNV, will share her experiences with the group.“This Shabbat is all about exemplifying the values of equality, peace, justice and morality. With the Shabbat, we hope to engage the Jewish community around the demolitions happening in these Palestinian communities, and rally together as Jews against the status quo of the occupation,” Rosenthal said.Hearings on the demolition of Sussiya were halted last year, when villagers and the Civil Administration agreed to sit down and see if they could agree on a plan for the village, either in its current location or at a nearby site. But the process was halted when Liberman took over the Defense Ministry in June, and the Civil Administration waited for him to issue an opinion on the matter.Liberman has in the past called for the demolition of Sussiya, which has been in a land battle with the state since the 1980s.“Thus far, the court hasn’t decided to intervene, so we want to show solidarity and that we are representatives of the international audience that is watching what’s happening,” said American-Israeli activist Shifra Sered.Tovah Lazaroff contributed to this report.