The episode occurred late afternoon on Wednesday as the brothers were walking back from the Flatbush Park Jewish Center in Mill Basin. 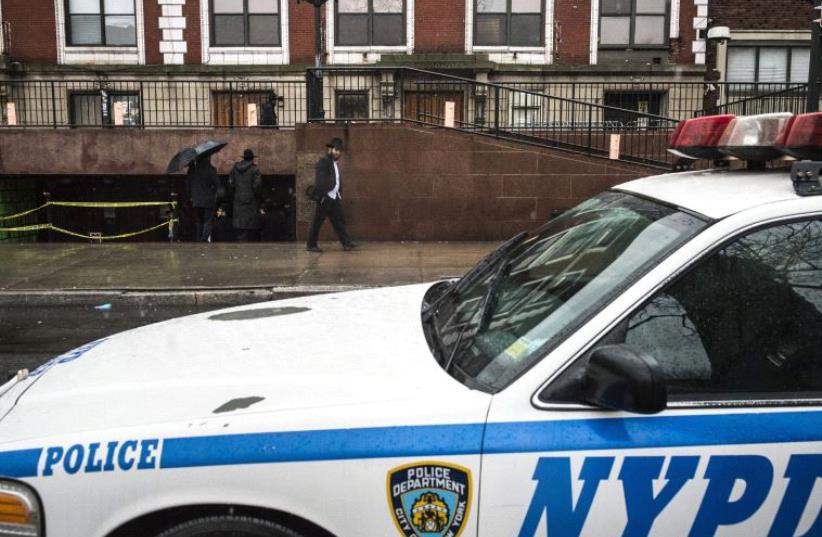 A police vehicle is seen outside a Brooklyn synagogue at the world headquarters of the Chabad-Lubavitch movement in New York City [File]
(photo credit: REUTERS)
Advertisement
Two brothers were verbally and physically assaulted on Wednesday as they were returning home from Yom Kippur services in Brooklyn, the New York Daily News citing polices sources reported.The episode occurred late afternoon on Wednesday as the brothers were walking back the from Flatbush Park Jewish Center in Mill Basin. Wearing yarmulkes and prayer shawls, the police said that three men, all white, shouted "fu**king Jews" at the brothers, ages 19 and 23, as they walked along the opposite direction on E. 66th St. by Strickland Ave., according to the Daily News.

The 23-year-old then turned around, stated "it's our holiday," and made contact with one of the men.At that point, the police noted, one of three individuals responded by punching the older brother in face. The assault continued when the trio attacked both brothers, leaving the siblings with cuts and bruises across their bodies.The assailants were identified as Caucasian males in their 20's. One wore a white T-shirt, the second a pink T-shirt, and the third a Pink Floyd T-shirt, according to the Daily News.The brothers were treated for their injuries at nearby New York Community Hospital and later released.