Jewish communities on high alert over threat of retaliation from Iran

Jewish communities in the Diaspora are paying close attention to developments following the assassination of Iranian nuclear scientist Mohsen Fakhrizadeh. 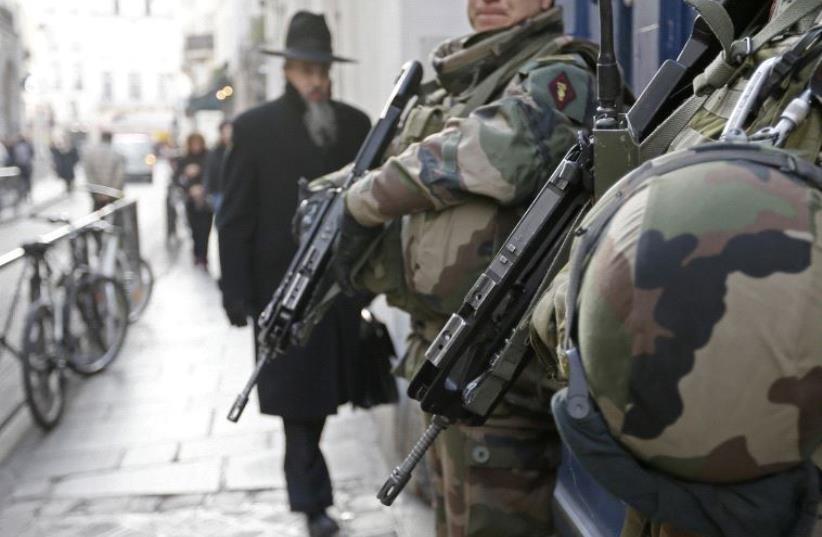 French soldiers patrol the street in a Jewish neighbourhood near a religious school and a synagogue as part of the highest level of "Vigipirate" security plan after the Islamist attacks in Paris January 20, 2015.
(photo credit: REUTERS)
Advertisement
The assassination last week of Iranian nuclear scientist Mohsen Fakhrizadeh generated a furious rhetorical response from the country’s leadership, with Ayatollah Ali Khamenei and President Hassan Rouhani both threatening revenge for the killing.But although the threats were made primarily against Israel, or “the Zionists” as the Jewish state is known in Tehran, Jewish communities in the Diaspora are also paying close attention to the developments in the wake of Fakhrizadeh’s death.Iran has been blamed in the past for attacks against Jewish targets and Israelis outside of Israel, including the bombing of the Israeli Embassy in Buenos Aires in 1993, the attack on the AMIA Jewish community center also in Buenos Aires in 1994, and the Burgas bombing in 2012 in Bulgaria.Michael Masters, the national director and CEO of the Secure Community Network security organization for Jewish communities, said the organization has worked with federal law enforcement agencies over the last decade to track Iranian threats to Jewish communities in the US.He noted that in recent months there has been an uptick in cybersecurity attacks in the US, often following incidents of conflict between American and Tehran, a phenomenon noted by the Department of Homeland Security.Masters said that such activity has included phishing scams, various fraud activities and efforts to obtain personal information on Jewish officials and organizations in the US.But he said that there have not been any specific, credible threats to Jewish communities or institutions from Iranian sources or its proxies following the killing of Fakhrizadeh.At the same time, due to heightened political tensions in the US due to the recent presidential election, SCN has already been on increased alert for potential security threats to the Jewish community, in particular from extremist, white supremacist groups.“We are making sure our security partners are well aware of this development because it adds another factor which needs to be monitored,” said Masters. “The reality is that we are living in a highly elevated security situation, and this event has highlighted why preparation is so important.”Yonathan Arfi, vice president of the CRIF umbrella group of French Jewish communities, said incidents like Fakhrizadeh’s assassination are always considered a source of heightened risk for French Jews.He noted that synagogues are open at limited capacity due to COVID-19 but schools are operating as normal, including Jewish schools, which have been targets in the past for terrorist attacks against the community.Arfi said the French Jewish community depends mainly on state security services to provide protection for its institutions, and that the Jewish organizations work closely with them and the French Interior Ministry on information-sharing regarding security threats.Like Masters though, Arfi said the French Jewish community is always on alert for security threats due to a history of terror attacks against it in the last decade.“As Jews in the Diaspora we have a culture of a vigilance, which is present in every aspect of Jewish life all year long,” he said. “Jewish leaders always have to be vigilant on security, it is part of the constraints on Jewish life today.”Similarly, Mark Gardner, CEO of the Community Security Trust of the UK Jewish community, said the organization has been on an elevated alert level due to recent events, including the terror attack in Austria earlier this month.“Jewish organizations should already be on very high alert because of the recent Vienna attack and the continuing far-right terror threat, but Iranian state terrorism is always on our minds and these events will only increase that.”