“You never remember how traumatic it is finding pictures of children on the floor that are water-logged and having to bring them to the homeowner and ask them ‘do you want to keep this?” 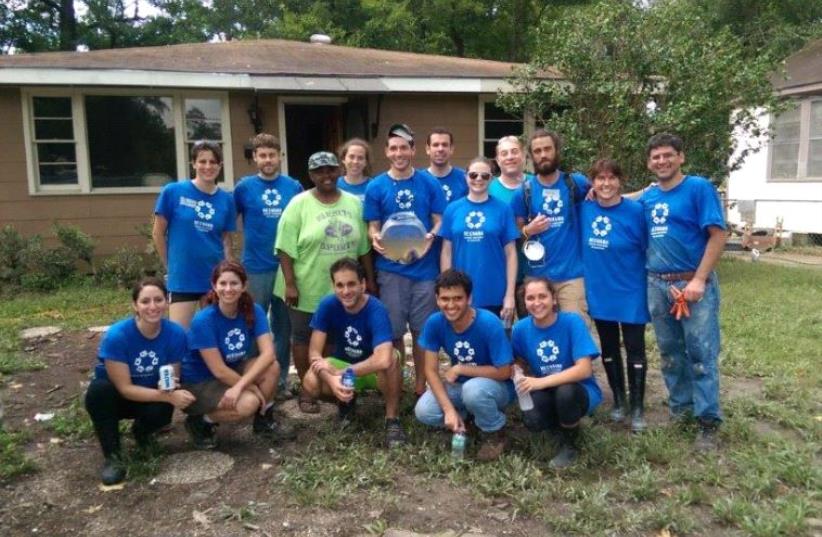 Jewish aid workers in Louisiana flood
(photo credit: TANA VELEN)
Advertisement
NEW YORK – As communities in the region of Baton Rouge in Louisiana try to deal with the consequences of flooding that some have called the worst natural disaster in the United States since Hurricane Sandy in 2012, Jewish organizations and individuals are providing assistance.Meteorologists say that some 6.9 trillion gallons of rain poured over Louisiana between August 8 and 14, and that 13 people were killed. The Red Cross has estimated the cost of the flood at $30m.National and local aid groups have been working on the ground to help the tens of thousands of households and businesses affected.Among them are a group of some 15 volunteers from the Jewish Federation of Greater New Orleans, who made the trip to Baton Rouge over the past weekend.According to the Federation, some 30 Jewish households sustained damage from the flooding to some degree.Tana Velen, who helped put together the Federation initiative, told The Jerusalem Post by phone on Monday that the organization felt a duty to help the Baton Rouge community.“As soon as we heard about the flooding, we had a staff meeting to decide how we were going to help people,” she said.She and the volunteers then partnered with the Jewish group Nechama, which provides natural disaster preparedness, response and recovery services nationwide. Over the weekend, they made the 90-minute drive to Baton Rouge.“We worked on two homes, a mother and son who were nextdoor neighbors, so it was really sad,” she told the Post. “We were able to remove furniture, clothing, food that was still there, everything that was still in there that had been wet.”Velen explained that while witnessing the damage was emotionally difficult, people’s spirits were still high with motivation as they looked through the piles of belongings to try to salvage something from their homes.“Even the homeowners, you could tell that they were battling emotions between utter sorrow after losing their whole lives, and then the gratitude they felt for having the volunteers there. It was a very intense day,” she said.It wasn’t the first time Velen engaged in disaster relief, but she said her experience over the weekend had still been very poignant.“You never remember how traumatic it is finding pictures of children on the floor that are waterlogged, and having to bring them to the homeowner and ask them, ‘Do you want to keep this?’” she told the Post. “It’s an awful moment.”Just 11 years ago, in 2005, Louisiana suffered Hurricane Katrina, the costliest and one of the deadliest storms in the history of the US.The state is also prone to tropical cyclones, frequent thunderstorms and tornadoes.Lawyer Michael Finkelstein of New Orleans lost his family home during Katrina. Because volunteers helped him and his family at the time, he decided to join this weekend’s relief efforts to give something back.“I went to college and law school in Baton Rouge, at Louisiana State University, and I feel like I sort of owed the community there something,” he told the Post by phone.“Once I made the decision that I was gonna try reaching out to people, I raised about $600 in 24 hours, bought as many supplies as I could, got in my car and then went up there to go pass those out to friends and other people who needed it,” he explained. “But I also went to give physical labor and help to people who needed it.”The situation in the area, Finkelstein said, is “pretty bad in terms of the extent of the damage and the scope of it.” In addition, many people he met there did not have flood insurance to cover the damages.Velen added that for residents, the flooding brings back traumatic memories.“It echoes the path of Katrina,” she said. “I heard of a family that lost everything in Katrina, and moved to Baton Rouge, and now lost everything again. How much can one family take? It’s awful.”The Jewish community in Baton Rouge is estimated to have only about 1,200 people, two congregations and a Chabad House.Jeff Gubitz, of the Jewish Federation of Greater New Orleans, has stepped in to temporarily replace the part-time head of the Jewish Federation of Greater Baton Rouge, who was herself affected by the flooding.He described the local Jewish community as “tight-knit, strong and very supportive of one another.”For the past week, he has been staying with members of the community and coordinating with congregations and the Federation to set up a plan to tackle the damage.“They just need help here,” he told the Post by phone.“This is probably one of the most overlooked natural disasters that has hit in a number of years. There is no name for the storm,” he related.“There is almost a sense of hopelessness, but they know that the community is responding and they know that the Jewish community across this country is responding.It’s what the Jewish community is supposed to be.”Gubitz said he found the spirits of local Jews and volunteers “heartening.”Velen agreed.“The whole [idea of] reaching out and helping the other is a fundamental value of Judaism,” she said.“It’s so intrinsic in Jewish values to want to reach out and help people in need when they’re suffering.”Michael J. Weil, the executive director of the Jewish Federation of Greater New Orleans, is overseeing the volunteering activity and said the disaster was even greater because “the attention of most people is either on the election or the Olympics.”“Here in New Orleans, we know all too well what that means: the trauma of losing everything, and being out of your home for many months,” Weil wrote in an email to the Post.“The Jewish community in New Orleans has responded rapidly and greatly. All of the nine synagogues in New Orleans have risen to the occasion in many ways, as well as most of our agencies,” he added.“The Baton Rouge community is in it for the long haul, and we in New Orleans will be alongside them,” he continued. “They need the help, and their tragic story must be told.”