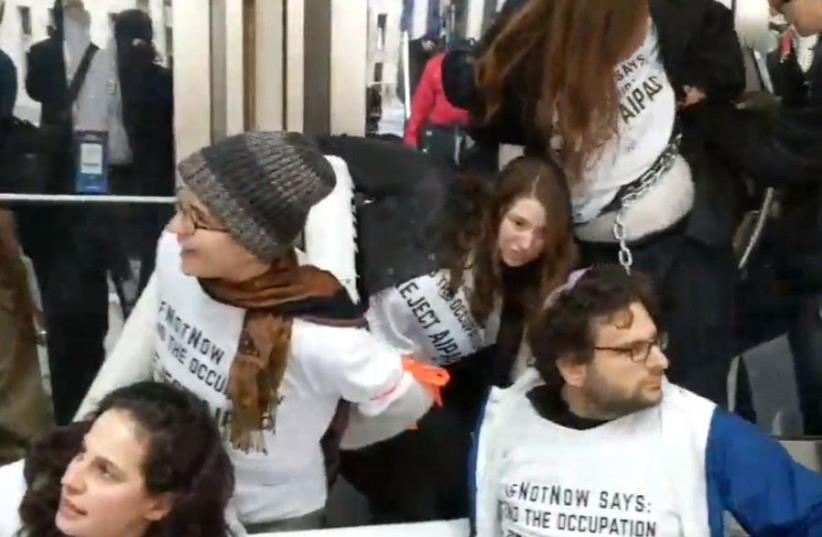 Police allowed the protesters to reach the Washington Conventions Center’s glass doors. Some AIPAC activists stopped and took pictures of the protesters, as the protesters looked back, some waving and grinning.“How can we have a sustained Jewish community in this country and a democratic Jewish community in Israel” as long as an occupation persists said Jeremy Zelinger, one of the protesters. “AIPAC does not represent us.”AIPAC does not formally back the occupation and favors a two-state solution to the Israeli-Palestinian conflict, albeit in relatively muted tones. It blames the Palestinians entirely for the absence of peace talks and does not criticize Israeli policies, including settlement building.Another theme was AIPAC’s supposed failure to confront the Trump administration on a range of other issues, including its restrictive policies on immigrants and refugees. AIPAC has rarely if ever pronounced on any U.S. government’s policy not having to do with Israel or its interests.Several protesters bore placards imprinted with the image of Dona Gracia Nasi, the 16th century Jewish entrepreneur who used her wealth to rescue Jews fleeing the inquisition. “Reclaim, reimagine, resist,” the posters said.

Member of Knesset Tamar Zandberg came outside to be with the #JewishResistance. Tamar, thank you for standing with IfNotNow. pic.twitter.com/P9v2xKmgOW

A dozen protesters carrying flags of the Jewish Defense League occasionally clashed with the protesters, and police intervened.AIPAC has drawn 18,000 activists to its policy conference this year, the largest ever. The theme is bipartisan support for Israel, and speakers include Vice President Mike Pence and both parties’ congressional leaders.
Advertisement
Hot Opinion