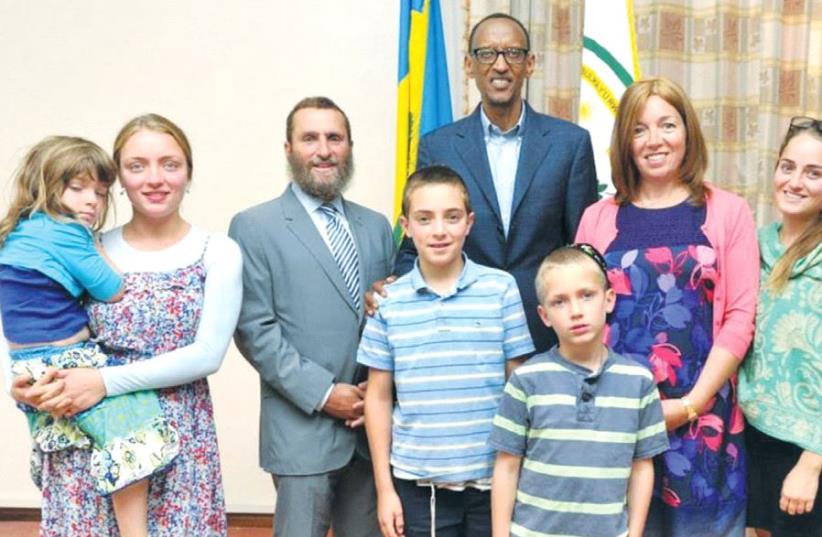 RABBI SHMULEY BOTEACH (center left) and his family meet with Rwandan President Paul Kagame (center) during one of the rabbi’s recent visits to the country.
(photo credit: SHMULEY BOTEACH)
Advertisement
NEW YORK - The World Values Network, a Jewish organization headed by Rabbi Shmuley Boteach, will be dedicating a Torah scroll to the people of Rwanda during its annual gala on Sunday evening in New York.The scroll, which will bear the name of Holocaust survivor Elie Wiesel, who passed away last year, is intended to later be brought to the country’s capital, Kigali, and be placed at a Jewish center, that the World Values Networks is planning on opening there.“This stems from my deep love and friendship for the people of Rwanda,” Rabbi Boteach, who visited the country several times, told The Jerusalem Post.During his visits, Boteach learned a lot about the 1994 Rwandan genocide and met with officials, including President Paul Kagame, whom he describes as “a phenomenal friend of Israel.”“I believe that the Jewish people and the Rwandan people are brothers and share not just a tragic history of mass slaughter, but more importantly a common history of renewed promise,” he said. “The Jewish people reconstituted themselves after the Holocaust to create the miraculous State of Israel and the Rwandans have rebuilt their country into one of Africa’s most impressive nations.”
Netanyahu visits Kigali Genocide Memorial in Rwanda , July 2016 (credit: GOVERNMENT PRESS OFFICE)
Boteach told the Post he had always wanted to open a Jewish center in Kigali, but not just for the very small number of Jews who reside there.“We want to open a center that is based on Jewish values for the people of Rwanda,” he said.In addition, the rabbi believes that opening such a center may attract more Jewish visitors to Rwanda.“What we want to do as a Jewish community is educate the world about the Rwandan genocide, just like we want to educate the world about the Holocaust,” he said.