Simon Wiesenthal Center accuses Culture Minister of failing to recognize the genocidal nature of the Nazi-sponsored Ustasha regime, and showing disdain for Croatians who fought against it. 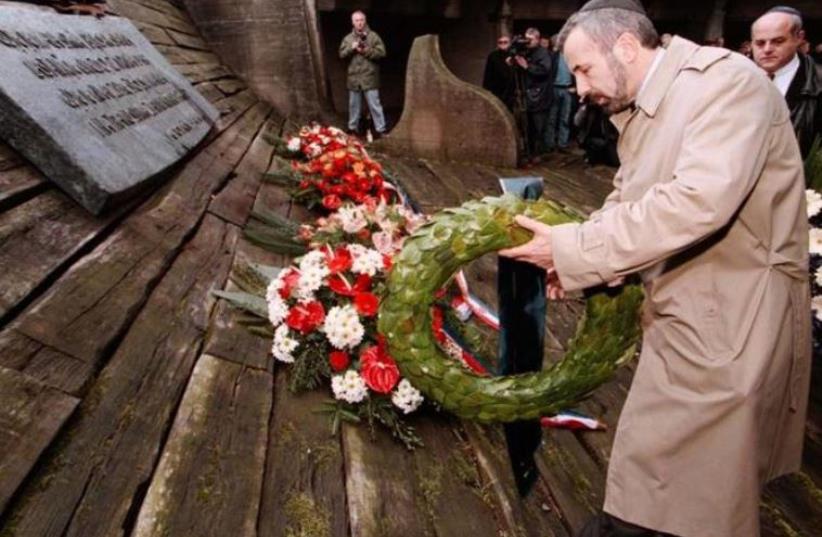 Ognjen Kraus, leader of Croatia's Jewish community, lays a wreath on the monument of Fascist victims, mostly Jews, Serbs and gypsies, during a commemoration held at the site of the former World War Two concentration camp in Jasenovac April 19, 1998
(photo credit: REUTERS)
Advertisement
ZAGREB - The Israel-based Simon Wiesenthal Center urged Croatia's government on Friday to dismiss its culture minister, saying he took a disdainful attitude towards Croatian resistance to fascism during World War Two.The Jewish human rights group expressed "shock and indignation at several actions taken and comments made" by minister Zlatko Hasanbegovic.Hasanbegovic has previously dismissed similar criticism as unfounded. He could not immediately be reached for comment on Friday.During World War Two, Croatia was under Nazi control and led by local collaborators called Ustashe. Many Croats fought as partisans within the communist-led resistance movement.Croatia is now a member of the European Union."We urge the Croatian government to replace Hasanbegovic with a person suitable for the post of minister of culture who will bring honour and prestige to the post, rather than embarrass his country before the entire world," the director of Wiesenthal Center, Efraim Zuroff, said in a statement on its website.No comment was immediately available from the Croatian government or from Hasanbegovic.Zuroff accused Hasanbegovic, a historian who is also involved in publishing, of failing to recognize the genocidal nature of the Nazi-sponsored Ustasha regime, and showing disdain for Croatians who fought against it. In a statement issued on Friday, Zuroff expressed the Simon Wiesenthal Center's outrage over Hasanbegovic's publication of the "notorious book about Holocaust commemoration by the universally-discredited American author Norman Finkelstein and his baseless and totally inaccurate comments regarding the history of Croatia during World War II and the Holocaust," the Center reported.  "The mere fact that Hasanbegovic publishes such trash, which he advertises on the website of the well-known white supremacist organization Stormfront, is sufficient reason to disqualify him from serving as a minister in the government of a European Union member in good standing," Zuroff added. "Even worse in the Croatian context, is the minister's blind refusal to recognize the genocidal nature of the Ustasha regime, and his disdain for the brave Croatian anti-fascists who fought against it. This absolutely baseless revision of the history of World War II and the Holocaust is totally outrageous and absolutely unacceptable," he added. Hasanbegovic is a minister in Croatia's center-right government, an alliance between the conservative HDZ party and the small reformist Most party.Croatia's center-left opposition and several civic groups have already criticized Hasanbegovic's appointment.