The preeminence of Jewish groups among those backing the litigants was not a surprise. 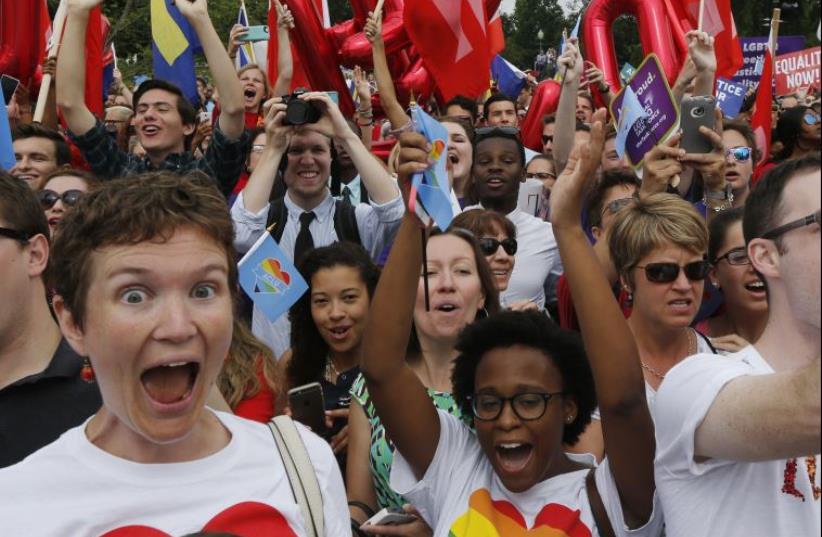 Gay rights supporters celebrate after the US Supreme Court ruled that the US Constitution provides same-sex couples the right to marry
(photo credit: REUTERS)
Advertisement
How often do you get the opportunity to pack “109 years,” #LoveWins and the colors of the rainbow into 140 characters?That’s how the American Jewish Committee celebrated the Supreme Court ruling Friday extending marriage rights to gays throughout the United States.“For 109 years AJC has stood for liberty and human rights,” its tweet said. “Today is a happy day for that proud tradition ‪#LoveWins.” It was punctuated with a heart emoticon splashed rainbow colors.
Top HeadlinesThe contrast between an organization founded at the launch of the last century celebrating the rights embraced by Americans only at the launch of this one was emblematic of the glee with which much of the Jewish establishment reacted to the ruling.The Anti-Defamation League, in its own tweet, left out its age (102) but also got in the hashtag, #LoveWins, and that funny little heart.Thirteen Jewish groups, among them organizations representing the Reform, Reconstructionist and Conservative streams, were among the 25 joining the amicus brief the ADL filed in Obergefell v. Hodges.The preeminence of Jewish groups among those backing the litigants was not a surprise. In recent decades, much of the Jewish establishment has embraced gay marriage as a right equivalent to the others it has advocated, including racial equality, religious freedoms and rights for women.Multiple groups, in their statements, cited the passage in Genesis that states humans were created “in the image of God,” which has for decades been used by Jewish civil rights groups to explain their activism.“Jewish tradition reminds us that we were all created equally, b’tzelem Elohim, in the ‘image of God’ (Genesis 1:27), and also shows us that marriage is a sacred responsibility, not only between the partners, but also between the couple and the larger community,” the Conservative movement’s Rabbinical Assembly said in a statement.Groups also were looking to next steps in advancing LGBT rights, including in the workplace.“You can now legally marry in all 50 states and put your wedding on your desk and be fired and have no recourse in the federal courts,” Rabbi Jonah Pesner, who directs the Reform movement’s Religious Action Center, told JTA.“We hope this will energize and inspire a bipartisan effort to end discrimination in the work place,” he said, specifying the “T” in LGBT — for transgendered people. “People should not be discriminated in the workplace because of expression of gender.”The notion that the decision would propel a broader debate about LGBT rights concerned the Orthodox Union, which in a carefully worded statement noted that it adhered to the traditional definition of marriage as between a man and a woman, but also recognized “that no religion has the right to dictate its beliefs to the entire body politic.”The OU, like other more conservative religious groups, was wary of new liberties that could infringe on its ability to hire officials who hew to their belief systems.“Will the laws implementing today’s ruling and other expansions of civil rights for LGBT Americans contain appropriate accommodations and exemptions for institutions and individuals who abide by religious teachings that limit their ability to support same-sex relationships?” the group said in its statement.The OU did not file an amicus brief in the Supreme Court case. Agudath Israel of America did, opposing gay marriage.The Jewish Council for Public Affairs, the consensus-driven public policy umbrella, recognized sensitivities on both sides in its statement.“We call for sensitivity and civility in this debate, understanding that the vast majority on all sides are people of good will,” it said. “Adjusting to change is not always easy or swift.”