The art installation offers a reflection on an individual and on life itself. 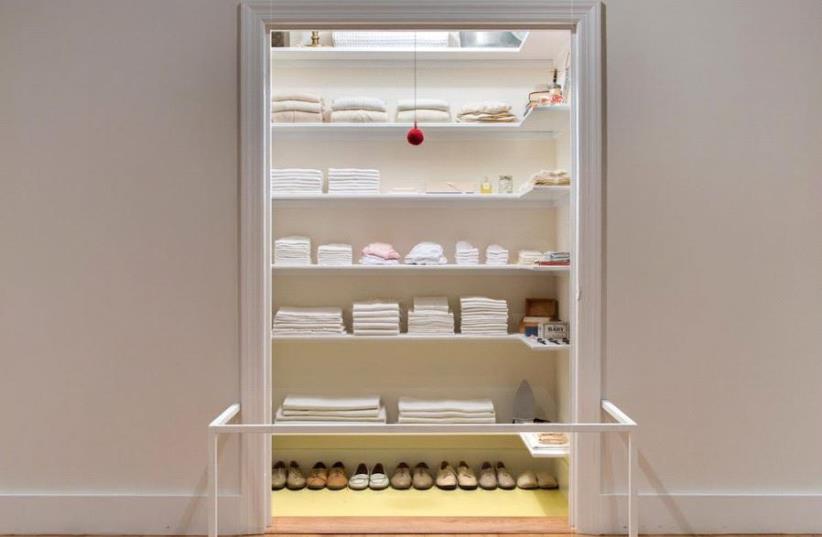 Sara Berman's closet.
(photo credit: RICK MEYEROWITZ)
Advertisement
NEW YORK – Sara Berman, a onetime Jewish immigrant in New York City, certainly had a unique personal style.It wasn’t just her choice of clothes, which were all in shades of white, cream and neutrals. It was also how she kept them folded, stacked and organized with militaristic precision.When Berman passed away in 2004, her daughter and artist Maira Kalman’s first instinct was to preserve her closet.“I knew immediately that her closet should be an art installation,” she told The Jerusalem Post. “But I had no idea how that would happen.”The wardrobe went on display in a niche at the Mmuseumm in Lower Manhattan in 2015.Now Sara Berman’s closet is running as an exhibit through September 5 at the Metropolitan Museum of Art in Manhattan.Berman’s closet doesn’t contain just her all-white clothes, but also some of her most cherished objects, including accessories, books, recipes, a potato grater (for latkes making), a cookie press and more.“We had to reconfigure the design, but we stayed true to the spirit,” Kalman told the Post.“I love the little notebook on the shelf,” she said. “It contains the patterns that she made for knitting sweaters for her family.”“The funniest is the pattern for the sweaters she made for our dog Pete,” she added.“Really touching, since she was so afraid of dogs, though little by little, she grew to love him.”Kalman and her sisters never asked their mother why she wore all white. “People never had to explain things [in our family]; they just happened,” she said. “But if we want to really hazard a guess, I think it had to do with an intense editing and deciding to be precise and elemental.”The meticulously organized and modest closet represents Berman’s life from 1982 to 2004, when she lived by herself in a small Greenwich Village apartment.Although it is impeccably arranged, with clothes precisely folded and linens even ironed, Kalman told the Post that her mother was not particularly obsessive with order.“She was funny and loose,” she said.If she were still alive, her loved ones are convinced that Berman would laugh at the fact that her closet of neutrals has become a piece of art, and find the idea completely ridiculous.Berman was born in the little village of Lenin in Belarus in 1920. When she was 12 the family moved to what was then British-mandate Palestine.She also witnessed the birth of the State of Israel.“Life in Israel was interesting, vivid, with lots of friends and family,” Kalman said. “Even though they were poor, there was no sense of being needy.”Berman’s father was a devout Jewish man. On Friday nights, the family would light the candles and have Shabbat dinner.“Saturday lunch, all would sit around the table, ending with religious songs,” Kalman told the Post. “Those songs still resonate with me.”In 1954, Berman and her husband moved to New York City. Years later, after some back and forth between the city and Israel, the couple separated. In 1982, Berman decided to settle in New York, close to her daughters.“Her connection to us was crucial, loving, monumental,” Kalman said.Kalman and her son Alex, who put together the display, believe the closet offers somewhat of a reflection on life itself.“The lovely thing is that there are so many things people can take away,” Maira Kalman said.“People often say that standing there is like standing at an altar: great peace, order, beauty, a sense of what is important, a sense of time well spent, caring about your life, about your things.”“There is great joy in doing your best – whether it be with something big or small,” Alex Kalman added. “And there is so much to see and learn about humanity when you look carefully – even at something as simple as a closet.”Berman’s offspring and grandchildren have kept their strong connection to Israel, which she has instilled in them.Maira Kalman, a renowned illustrator and author, will unveil a large-scale mural at the Israel Museum in Tel Aviv on June 2nd, as part of a special display entitled Beloved Dog and inspired by illustrations of dogs from Kalman’s books.