According to prosecutors, journalist neglecting to list certain information in novel chronicling sites around the city of Vienna that had belonged to Jews. 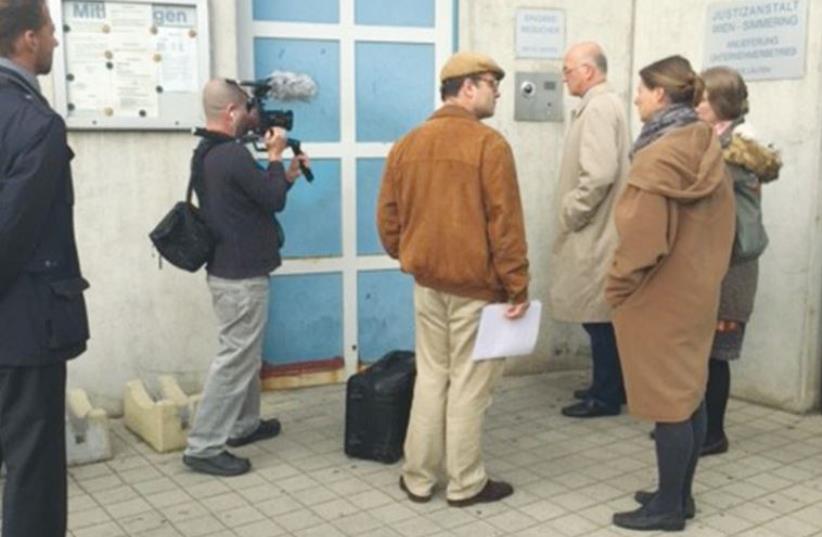 STEPHAN TEMPL (center) prepares to enter Simmering jail in Vienna
(photo credit: STEPHANTEMPL.COM)
Advertisement
Jewish journalist Stephan Templ, who last year was convicted of defrauding the Austrian government when applying for restitution for a building stolen from his family by the Nazis, is being “wrongfully imprisoned” following the revelation of new, exonerating evidence, according to his lawyer.According to prosecutors, Templ, the author of Unser Wien (Our Vienna), which catalogs sites around the city that had belonged to Jews, “damaged the Republic of Austria” by neglecting to list the name of his mother’s estranged sister Elisabeth Kretschmar on his claim for the site, adding that had she been made aware of the property, she may have forfeited her share in favor of the government. He was subsequently sentenced to a year in prison and was jailed last October.“After years of denials and refusals, Mr. Templ’s legal team was finally granted access to view documents that conclusively prove that the Austrian authorities had knowledge of Mr. Templ’s aunt,” said attorney Robert Amsterdam.“It is completely implausible for Austria to claim that Templ concealed the existence of the aunt when the name is mentioned at least six times in documents he himself submitted” to the arbitration panel in charge of restitution.According to The Guardian, whose reporters viewed the documents, representatives of the panel denied having been made aware of Kretschmar’s existence. The documents were reportedly found in the offices of Austria’s General Settlement Fund (GSF) in late December after three years of requests by Templ’s defense team.“It’s time to end this reprehensible farce,” said Amsterdam. “We have a situation here where Austria acknowledges these thefts by the Nazi regime, but then jails the victim of the theft, despite the absence of any damaged party. It is difficult not to see shades of retrograde official anti-Semitism in this case.”Amsterdam has also reportedly turned to the United Nations Human Rights Council over the matter.Amsterdam is not alone in such thinking. Following Templ’s incarceration, Holocaust historian Rafael Medoff, director of the David S. Wyman Institute for Holocaust Studies, asserted in an article for the Jewish News Service that “there are grounds to fear that he [Templ] is being punished for exposing Austria’s failure to return seized property to its Jewish owners.”Austria has famously failed to have come to terms with its Nazi past in the same way as Germany, and “since the day World War II ended, Austrians have claimed that they were not partners of the Nazis but actually “the first victims of Nazism,” he wrote.Medoff and 74 other historians had previously written to the Austrian ambassador in Washington protesting what they view as a grave injustice.