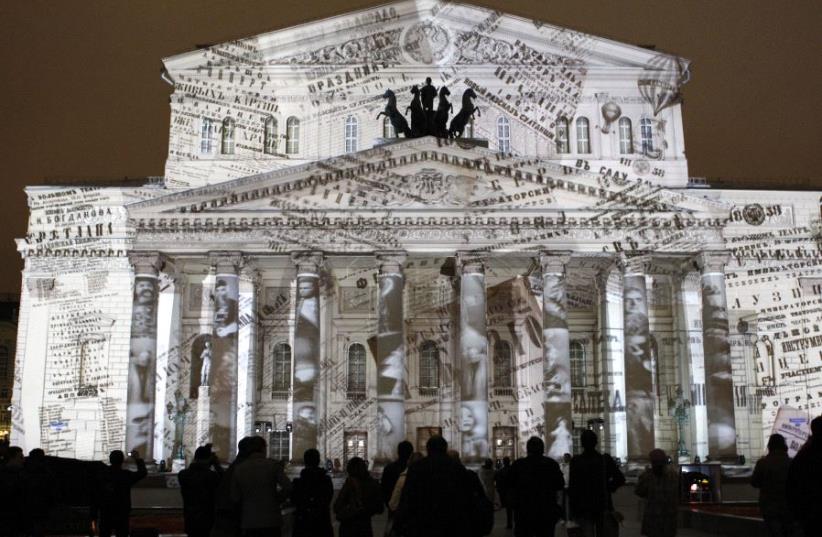 The Bolshoi Theatre in central Moscow
(photo credit: REUTERS)
Advertisement
Russia's Bolshoi theater is set to premiere Mieczyslaw Weinberg's opera 'Idiot', based on the world renowned masterpiece of Fyodor Dostoyevsky.The famous story of the 19th century impoverished Russian aristocrat Prince Myshkin misunderstood and outcast from the society drove the inspiration of the artists around the world.Many critics compared the character with Jesus Christ, pointing out his profound philosophy of compassion and ability to feel the pain of others.Now the Bolshoi theater is presenting the interpretation of a composer of Jewish origin, who fled from Poland to Russia to escape the Nazis and was denounced there as a "cosmopolitan" who wanted to create a breakaway Jewish state. The composer's parents and sister died in a concentration camp, his Yiddish-language actor father-in-law was killed on Stalin's orders and the Polish-born composer himself was imprisoned by the KGB and only released after Stalin's death.Piotr Migunov, who takes part in the performance, said that the expressive power of Weinberg's 'Idiot' gave him a way to delve into the feelings in spite of the difference between himself and the character he is playing."The thing that helped me the most is the music of (Mieczyslaw) Weinberg as in his music he showed all the complexity of this character," he said.Staged in the original 19th century setting, the fundamental opera written in 1986 was shortened from the original length of over three hours, but the plot was left intact."I am certain that text (of the novel) was very important to Weinberg when he wrote (the opera). And the literature material of Dostoyevsky was very important. And it is very important to me to realize (Fyodor) Dostoyevsky on the stage after all and with the music by Weinberg. And today I cannot imagine a performance based on the Idiot with different music. I cannot imagine that," said the director, Yevgeny Arye.The stage space is split into three abstract areas, where the events of the novel can develop simultaneously. This preserves the original idea of the composer - according to footnotes on the theater's website.The first public performance of the opera is set for the evening of Sunday.