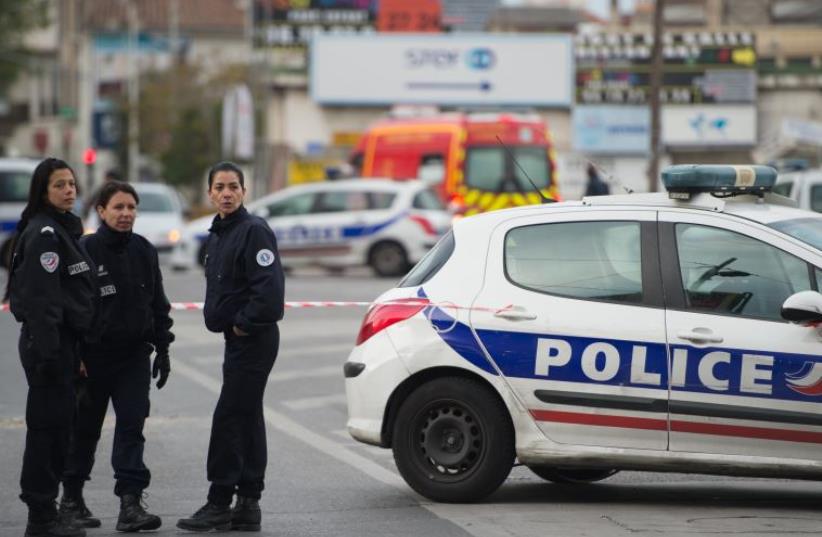 Police.
(photo credit: AFP PHOTO/BERTRAND LANGLOIS)
Advertisement
MARSEILLES - A teacher at a Jewish school in the southern French city of Marseilles was stabbed on Wednesday by three people professing support for Islamic State, but his life was not in danger, prosecutors said.The victim was identified as Tziyon Saadon who is in his fifties.
Paris the day after: Reflection of a Jewish youth leader
The three men who attacked the teacher uttered anti-Semitic remarks during the incident, AFP reported. Three people on two scooters, one of them wearing an Islamic State t-shirt, approached the teacher in the street, Marseilles prosecutor Brice Robin told Reuters.During the incident, one of the attackers showed a picture on his mobile telephone of Mohamed Merah, a homegrown Islamist militant who killed seven people in a series of attacks in southern France in 2012 including an attack in which three children were killed at a Jewish school in Toulouse. "The three people insulted, threatened and then stabbed their victim in the arm and leg. They were interrupted by the arrival of a car and fled," Robin said of the Thursday evening attack. Emergency workers evacuated the wounded educator to a hospital, and authorities were searching for the perpetrators of the incident. The UEJF Jewish students' union condemned the attack in a statement and urged police to use all means to catch the assailants.It said that the victim, a history and geography teacher, had received three knife wounds.The attack came several weeks after a knife attack on a rabbi in the city, France's second biggest. The Anti-Defamation League said it was “alarmed and saddened” by the stabbing.“Anti-Semitism is a core tenet of Islamic extremist ideology, attacks on Jews by ISIS sympathizers should come as no surprise,” ADL CEO Jonathan Greenblatt said in a press release. The teacher, a bearded, observant Jew, was wearing a kippah, Michele Teboul, the president of the local branch of the CRIF umbrella of French Jews, told JTA. France has been in a state of emergency since gunmen and suicide bombers killed 129 people in a series of attacks, claimed by Islamic State, in Paris last Friday.