The school reported her missing to police at 9:25 a.m. on Monday morning, and her body was found by a family member about 20 minutes later. 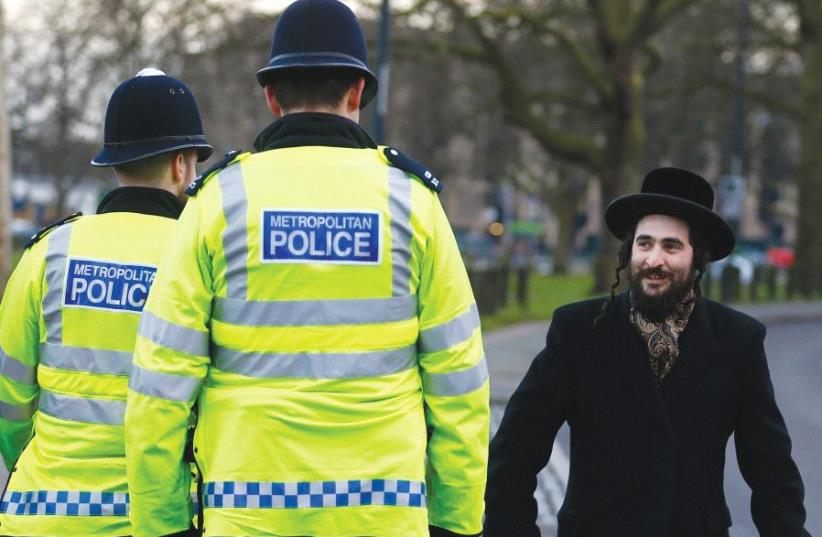 A MEMBER of the Jewish community walks in north London in 2015 as police officials stand watch.
(photo credit: REUTERS)
Advertisement
A Jewish 16-year-old girl was found dead in an abandoned building in Manchester, England on Tuesday morning.The girl, a student at Yavneh Girls at Manchester’s King David High School, told her family that she was going to use her school’s gym early on Monday morning, around 5 a.m., the Manchester Evening News reported.The school reported her missing to police at 9:25 a.m. on Monday morning, and her body was found by a family member about 20 minutes later. The building in which her body was found is close to the girl’s home.According to reports the girl, identified as Sarah Goldman, was allegedly found hanged.A 41-year-old man was arrested on suspicion of murder, but later released on bail. “We are still keeping an open mind and will be exploring all avenues,” a police spokesman said.

Superintendent Caroline Hemmingway of the Greater Manchester Police told the paper that police "are currently investigating the tragic death of a 16-year-old girl in Kersal, and it is our top priority to find out exactly how she died.

“We have arrested a man in connection with the girl’s death, however, we are still keeping an open mind and will be exploring all avenues,” she added.

“We are trying to piece together this puzzle and help give the girl’s family the answers they deserve,” she added.

The Jewish school said in a statement that students were being offered support in the wake of the death. It said that “Sarah was a lovely, bright, intelligent and well-mannered pupil and she will be hugely missed by everyone at school.”Ilanit Chernick contributed to this report.