This has been the best season of 25-year-old Diego Schwartzman’s professional tennis career. 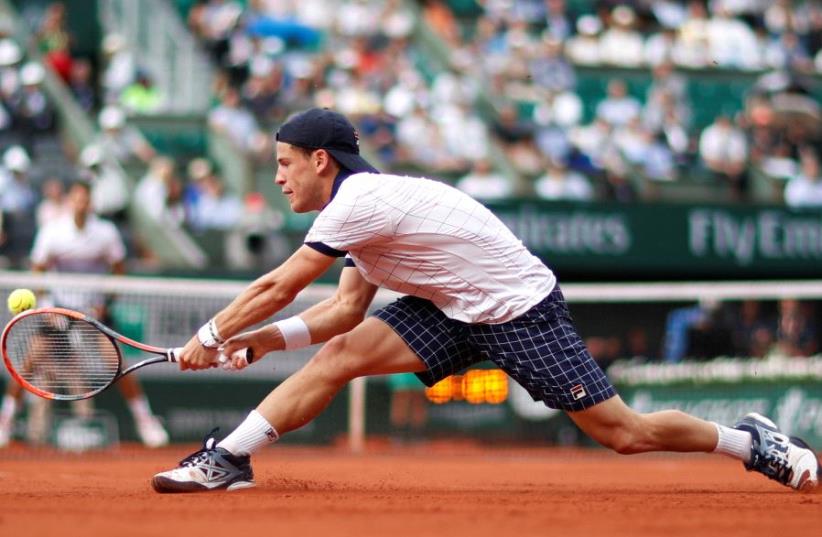 Argentina's Diego Schwartzman in action during his French Open third round match against Serbia's Novak Djokovic, June 2, 2017.
(photo credit: REUTERS / CHRISTIAN HARTMANN)
Advertisement
Argentinean Jewish tennis phenom Diego Schwartzman lost after reaching the final of the European Open in Antwerp, Belgium.
Schwartzman, who was raised in a Jewish family in Buenos Aires and started to play tennis in one of Argentina’s popular Jewish sport clubs, Hacoaj, was defeated Sunday by France’s Jo-Wilfred Tsonga, 6-3 and 7-5.
It was Schwartzman’s third career final. His only win in an Association of Tennis Professionals tournament came in May 2016 at the TEB BNP Paribas Istanbul Open in Turkey. He lost the European Open in Antwerp last year, defeated by another Frenchman, Richard Gasquet.
This has been the best season of 25-year-old Schwartzman’s professional tennis career. After ending 2016 ranked 52nd, he is currently ranked 26th by the Association of Tennis Professionals.
He reached the third round of the French Open, the first time he did so in a Grand Slam tournament, and notched a win against Marin Cilic, ranked fourth in the world, at the US Open. He defeated Dominic Thiem, another top 10 player, in Canada.
Schwartzman, who is 5’7″, is known by the nickname “the peque” an abbreviation of the Spanish word “pequeño” which mean short or small in Spanish.
He is a good friend of Israeli tennis players Dudi Sela and Johny Erlich, a Buenos Aires native who grew up in Israel. He told the ATP website last year that he is always recognized on the streets by the Jews in his home country.
“I am Jewish and in Argentina, we have many Jewish [people] there, and all the people there know me,” he said.
He said passersby tell him, “Enjoy! Good luck this season. Come on, keep going!