The day is commemorated every year on the 26th of Iyar which in 1948 fell on May 9- Victory Day. 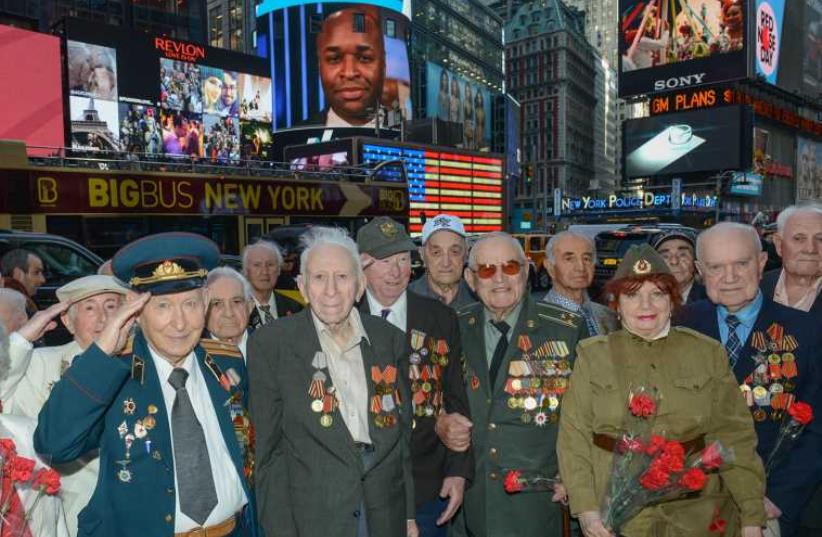 Jewish WWII veterans of the Soviet Red Army celebrate Victory Day in New York’s Times Square.
(photo credit: SHAHAR AZRAN)
Advertisement
Jewish veterans, wearing their Soviet uniforms and World War II medals, marched proudly through the streets towards Times Square on Friday, joined by local rabbis and leaders of the New York Jewish community in commemoration of "Rescue of European Jewry day."The day is commemorated every year on the 26th of Iyar  which in 1948 fell on May 9, Victory Day.“As Jews we are proud to gather for this historic celebration honoring a great victory over evil,” said Boris Feldman, 94, from Brooklyn who fought with the Red Army for two years after being released from a Ukrainian ghetto. “While it’s important to remember the end of the Holocaust, we must remain vigilant even today. Jewish communities throughout the world feel increasingly threatened due to the rise of Antisemitism.”“Victory Day” is celebrated on May 9 around the world in countries with major Russian immigrant populations, including Israel. With more than 1.6 million Jews from the former Soviet Union, Israel officially recognized the holiday in 2000.