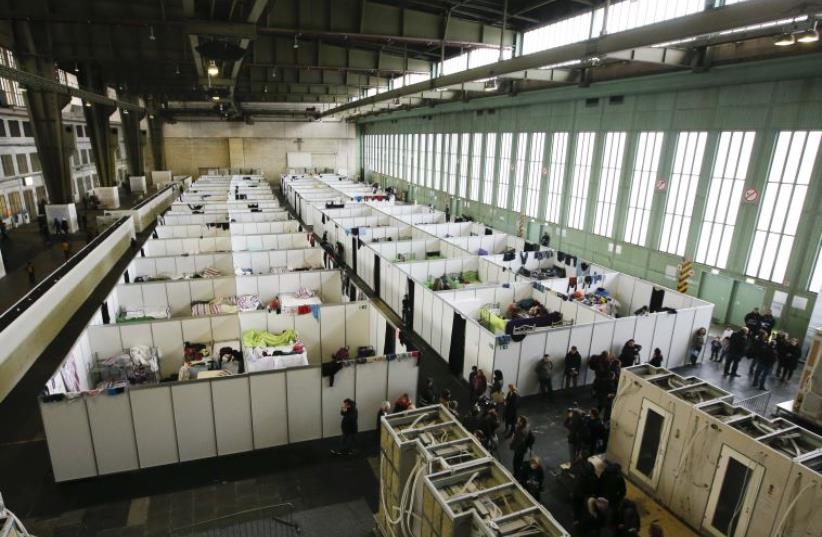 A general view of a shelter for migrants inside a hangar of the former Tempelhof airport in Berlin
(photo credit: REUTERS)
Advertisement
A 28-year-old Israeli transplant to Berlin recently visited a former Nazi airport that has been converted into one of the German capital's largest refuge shelters to talk to the Middle Eastern migrants housed in the historic complex about their views on Jews and the Jewish state.Originally reported Monday by German newspaper Die Welt, Kippa-clad Yonatan Shai decided to sojourn into the former Tempelhof Airport refugee center as he said the massive influx of refugees, mainly from Syria and Iraq, has concerned the local Jewish community. According to the Tel Aviv native, who moved to Berlin a year ago, he planned the visit as a means for open dialogue, however he remained weary of possible anti-Semetic reactions."I'm not afraid, but I'm on guard," the German paper quoted him as saying.According to Die Welt, the Templehof Airport has housed some 2,000 refugees since October. In one of the long corridors separating hangars that serve as living areas, the visiting Israeli came across anti-Semitic graffiti scrawled across the walls. According to the report, the graffiti included red swastikas, Stars of David accompanied by the satanically-affiliated number 666, and maps of Israel in the colors of the Palestinian flag. Die Welt cited Shai as linking the graffiti to refugees of Palestinian background.With his traditional Jewish yarmulke visible, Shai was reportedly met initially by the inhabitants with a mix of refugee children proudly displaying their German language skills and grown men ominously whispering "Jew."When he confronted those hissing under their breath, they men assured Shai that he was mistaken and that they had not said anything. Shai met other refugees who expressed consternation toward the Jew from Tel Aviv. However, he encountered others who responded to him with criticism of the Israeli government, but no ill-will toward the country's people. Shai approached a pair of university students from Baghdad, who apparently had never met a Jew before, asking them what they learned about Israel in their homeland. Yet in a more hostile encounter, Die Welt reported that one young refugee boy had menacingly gestured and told Shai "the Jews must get out of the country."Nonetheless, two other young Iraq men expressed empathy with Shai as members of a minority group in the European state. One of the two explained that he had visited the Berlin Holocaust Memorial and recounted an attack on Arab woman, saying "hatred exists on all side."Shai left the refugee center unscathed, hopeful, yet struggling to provide an answer to whether Germany should open its borders and host unlimited refugees, the report added.