After a lengthy restoration period, and a little bit of controversy, the historic Edirne Synagogue was re-opened on March 26. 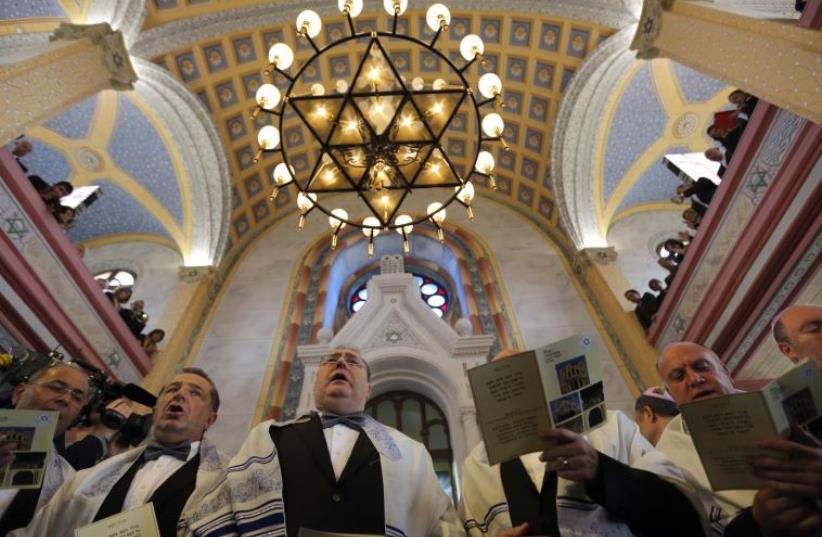 Jewish community members attend the re-opening ceremony of Great Synagogue in Edirne, western Turkey March 26, 2015.
(photo credit: REUTERS)
Advertisement
In celebration of the recent restoration of the Great Edirne Synagogue, Turkey's Jewish community hosted a fast-breaking Iftar supper that saw over 700 Jews and Muslims come together earlier this week, Turkish daily Hurriyet reported.With the help of the Directorate General of Foundations, head representative of the Jewish community in Turkey, Ishak Ibrahimzadeh, wanted to show his appreciation and "thank Endirne's residents" through an Iftar meal."We thought that the most convenient way to thank people in Edirne was to share an Iftar meal with them" Ibrahimzadeh said, adding "We thank them all very much. We returned to Edirne and found a more beautiful home than our own," speaking in regards to the northwestern province. After a lengthy restoration period, and a little bit of controversy, the historic Edirne Synagogue was re-opened on March 26.The synagogue had become the center-point in a political dust up between Edirne Govenor Dursun Ali Şahin and its Jewish community after Sahin told reporters that the synagogue would not be reopened to worship, as planned, but instead be turned into a museum. The comments were made in response to what Hurriyet called  "retaliation for the Israeli military raid on Jerusalem’s al-Aqsa Mosque at the time."Sahin later apologized for his remarks, claiming that his comments were not intended toward Turkey's Jews.The Great Synagogue of Edirne was built in 1907 after a large fire in the city in 1905 destroyed 13 separate synagogues. The building was constructed using Vienna’s Leopoldstadter Tempel, which was later destroyed by the Nazis, as a model, but it was abandoned in 1983 due to a lack of worshipers, according to Hurriyet.The synagogue was later slated to become a museum after its custodianship was transferred to the local Thrace University, but after fierce criticism from the Jewish community it was handed back to the General Directorate for Foundations.