Jasenovac, east of the capital Zagreb, is notorious for mass killings of Jews, Serbs, gypsies and anti-fascist Croats under the Ustashe government. 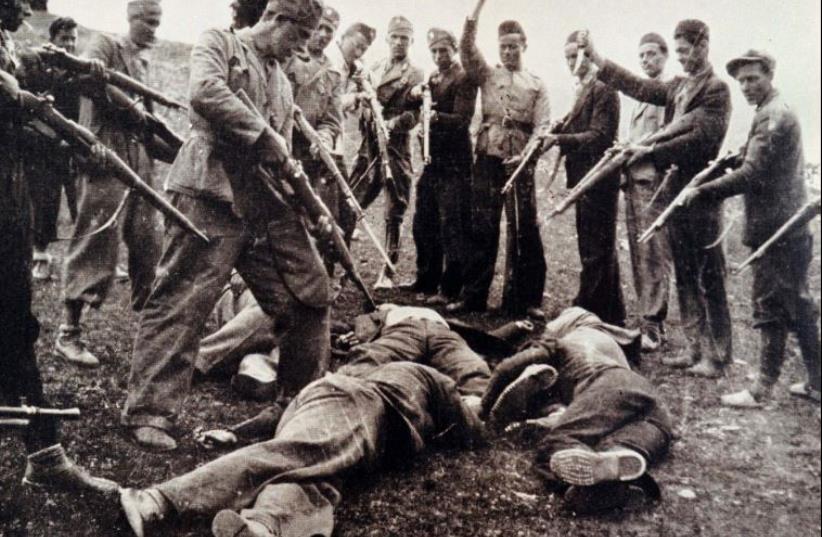 Victims of the Nazi-backed Ustasha regime killed at the end of the World War Two lay on the ground surrounded by posing Ustasha soldiers near the Sava River in Croatia in 1945
(photo credit: REUTERS)
Advertisement
Croatia held a memorial ceremony on Friday for tens of thousands of people who died at the World War Two Jasenovac concentration camp, but it was boycotted by Jewish and Serb groups unhappy at official handling of recent neo-Nazi incidents.Jasenovac, 70 km (45 miles) east of the capital Zagreb, is notorious for mass killings of Jews, Serbs, gypsies and anti-fascist Croats under the Ustashe government, which ruled the Nazi-puppet Independent State of Croatia from 1941 to 1945.Prime Minister Tihomir Oreskovic led a silent column of officials who laid wreaths at the memorial to the victims on the 71st anniversary of a mass break-out from the camp at the end of the war.In an hour-long ceremony accompanied by solemn music, Catholic, Orthodox and Muslim prayers were recited and actors read from the letters of inmates of the death camp, dubbed the "Auschwitz of the Balkans."Members of Croatia's small Jewish community, the Serb minority and an anti-fascist group boycotted the annual ceremony in protest at what they say is the authorities' feeble reaction to recent events that they say "downplay and revitalize" the World War Two Ustashe government.These include the shouting of the Ustashe greeting at a recent street protest in Zagreb and Ustashe chants by some home fans at a Croatia-Israel soccer match in March."Revitalization of the Ustashe regime is only exceptionally condemned. It is an avalanche that reminds us of what was happening in the so-called Independent State of Croatia," a Jewish community leader, Ognjen Kraus, said in Jasenovac last week.Jews held a separate commemoration in Jasenovac last Friday. The Serbs and an anti-fascist group will do so on Sunday.
A few Jews and Serbs did attend Friday's official ceremony, however.Croatia's new center-right government, which took office in January, condemned the crimes of the Ustashe government this month, but Kraus said that happened only after Jewish and Serb groups announced the Jasenovac boycott."Attempts at historical revisionism are visible in the society, even in media, while police, state prosecution and politicians fail to act and stem incidents like those with the Ustashe greeting," said Sasa Milosevic from the Serbian National Council, the leading Serb minority group."We don't feel we have a place in Jasenovac today," he said.The Jewish and Serb communities have also voiced concern over changes to the exhibits at the Jasenovac museum which they say fail to adequately reflect the criminal nature of the Ustashe government. They demand more thorough teaching in schools of the horrors of the Ustashe government.Estimates of the number killed at Jasenovac vary widely. Independent historians put the number of victims at between 80,000 and 100,000. Some Serbs put the death toll at more than 700,000.