Pope Francis: Attacks on Jews are anti-Semitism, as are attacks on Israel

Pontiff meets with Jewish leaders on 50th anniversary of Nostra Aetate declaration that led to improved relations between Jews and Catholics. 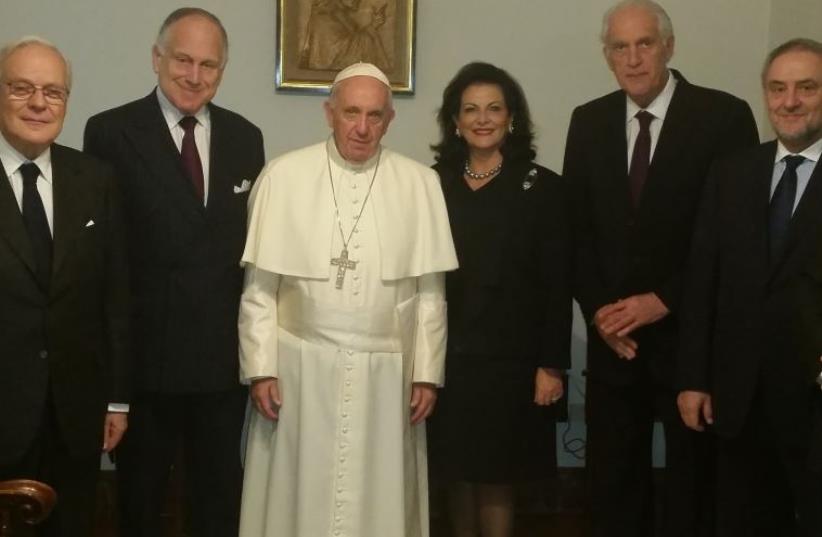 Pope Francis meets with World Jewish Congress leaders at the Vatican
(photo credit: WORLD JEWISH CONGRESS)
Advertisement
Jewish leaders met with Pope Francis in Rome on the 50th anniversary of the Nostra Aetate, the declaration promulgated by Pope Paul VI that led to improved relations between Jews and Catholics.“Yes to the rediscovery of the Jewish roots of Christianity. No to anti-Semitism,” the pope said Wednesday morning during the public audience on St. Peter’s Square.Later, Francis said, “Since Nostra Aetate, indifference and opposition have turned into cooperation and goodwill. Enemies and strangers became friends and brothers.”The landmark document inaugurated historic changes in the Catholic Church’s relations with other faiths. Its 600-word section on Judaism – approximately one-third of the document – rejects the long leveled charge against the collective Jewish people that Jews are guilty of killing Christ.“True, the Jewish authorities and those who followed their lead pressed for the death of Christ; still, what happened in His passion cannot be charged against all the Jews, without distinction, then alive, nor against the Jews of today... Although the Church is the new people of God, the Jews should not be presented as rejected or accursed by God, as if this followed from the Holy Scriptures,” that document read.The Jewish leaders were part of a delegation of representatives of the World Jewish Congress in Rome, there for a meeting of its governing board.The meeting focused on the situation of Jews around the world, as well as the current tensions in the Middle East, the refugee crisis in Europe and the Iranian threat.In St. Peter’s Square, Francis effusively greeted a Jewish leader from his native Argentina.“You’re still alive?” the pope greeted Julio Schlosser, head of the DAIA umbrella organization of Argentina’s Jewish community, giving him a hug.Prior to the public audience, the pope received WJC president Ronald Lauder in a private audience and met with representatives of the American Jewish Committee.The AJC issued a statement on Wednesday praising the document as having “transformed Catholic-Jewish relations.”“AJC is proud of the singular role it played in advisement, research and creation of an environment facilitating the Nostra Aetate achievement,” said David Inlander, chairman of AJC’s Interreligious Affairs Commission.Speaking to a mixed audience of Christians and Jews in June, Pope Francis said that over the past fifty years “we are able to see the rich fruits which it has brought about and to gratefully appraise Jewish-Catholic dialogue.”“Our fragmented humanity, mistrust and pride have been overcome thanks to the Spirit of Almighty God, in such a way that trust and fraternity between us have continued to grow. We are strangers no more, but friends, and brothers and sisters. Even with our different perspectives, we confess one God, creator of the universe and Lord of history. And he, in his infinite goodness and wisdom, always blesses our commitment to dialogue.”“Christians, all Christians, have Jewish roots,” the pope asserted. “The Christian confessions find their unity in Christ; Judaism finds its unity in the Torah. Christians believe that Jesus Christ is the word of God made flesh in the world; for Jews the word of God is present above all in the Torah.”Jewish leaders around the world came out in praise of the changes wrought over the past half century.“During these 50 years there have been many different gestures made by Popes, mainly by John XXIII, John Paul II and Francis for the Jewish world, but the road is long and we must all continue to work on education of mutual respect and appreciation,” the Federation of Jewish Communities of Spain said in a statement Wednesday.“This auspicious anniversary should inspire us to address the next challenge among the Abrahamic religions – to find the path to narrow the chasm and divide between Judaism and Islam.Then we can realize the full potential of Nostra Aetate, common faith and common fate,” said Rabbi Marc Schneier, the president of the Foundation for Ethnic Understanding.Calling the document and its disavowal of anti-Semitism “deeply significant,” Rabbi Avi Shafran of the ultra-Orthodox Agudath Israel of America said that it “contributed much to the good relations shared by Catholics and Jews today.”“It should serve as an example to follow, fifty years later, for some other Christian groups, and some other religions, to likewise disown the perennial scourge of mindless Jew-hatred,” Shafran added.Rabbi Pinchas Goldschmidt of the Conference of European Rabbis likewise praised the document, calling it an “act of teshuva,” or repentance, by the Catholic Church.Several days ago the Polish Episcopate declared anti-Semitism a sin, winning strong praise from the country’s chief rabbi.According to Radio Poland, the local branch of the Church issued a pastoral letter asserting that “anti-Semitism and anti-Judaism are sins against the love of thy neighbor” and that “Christian- Jewish dialogue must never be treated as ‘the religious hobby,’” but rather “should increasingly become part of the mainstream of pastoral work.”The letter admitted that the Nazi genocide of Jews on Polish soil was “sometimes met with indifference among certain Christians” and that “if Christians and Jews had practiced religious brotherhood in the past, more Jews would have found help and support from Christians.”The newest Catholic overture, made only days before the Nostra Aetate anniversary, was met warmly by Polish Chief Rabbi Michael Schudrich.“The statement of the Polish Episcopate condemning anti-Semitism as a sin is a clear and important declaration of moral and historic value, not only for Poland, but for Europe and beyond,” Schudrich told The Jerusalem Post.sign up to our newsletter