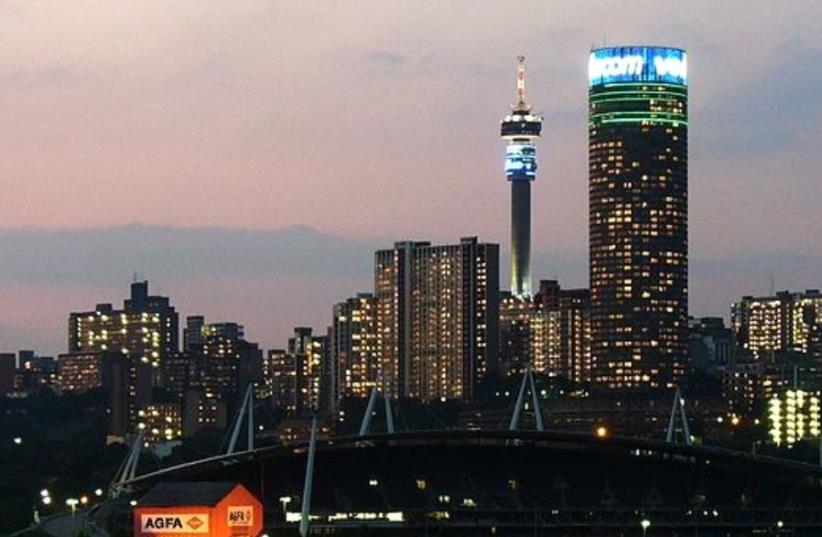 Johannesburg skyline
(photo credit: WIKIMEDIA)
Advertisement
A leader from the Johannesburg Municipality in South Africa has been suspended by the city’s mayor pending an investigation after she said that both she and “the City of Joburg stands with Israel.”Mpho Phalatse, who is in charge of the city’s health and social development portfolio, made the remarks at the South African Friends of Israel conference over the weekend.“I would like to declare that I am a friend of Israel, and the city of Johannesburg is a friend of Israel! Shalom, Shalom!” she declared on Sunday.Johannesburg is run by the Democratic Alliance (DA), which is the country’s opposition party.Mayor Herman Mashaba said her suspension would give the Democratic Alliance time to investigate whether comments Phalatse made at the Friends of Israel meeting were in line with party policy. He added that he believes in a two-state solution.Mashaba also said he was disappointed that such comments were attributed to the City of Johannesburg in such “an emotional and sensitive matter.”Several leaders within the DA said they would be pressing charges against Phalatse.In a statement, the South African Jewish Board of Deputies (SAJBD) said that this was an attack on free speech in South Africa. “Mpho Phalatse, MMC [Member of the Mayoral Committee] for the DA in Gauteng, has become the target of hysterical condemnation for having expressed support for Israel at a South African Friends of Israel conference on Sunday. This is despite her subsequent clarification that she did so in her personal capacity,” it said.“These are just the most recent instances of attempts to silence South Africans who challenge the anti-Israel narrative,” the statement continued. “It is all part of an environment in which Israel is being demonized to a degree that bears no relationship to reality. The propagandist whipping-up of emotion aims at ensuring that only one opinion on the subject will be allowed, with anyone who disagrees with that narrow-minded, usually agenda-driven opinion becoming a target for vilification.“Anti-Israel bigotry does not merely threaten the rights of the hundreds of thousands, if not millions of South Africans who are passionate supporters of Israel. It also poses a serious threat to democracy in our country,” the organization explained.The JBD added that South Africa has one of the most progressive constitutions in the world, one that guarantees freedom of association and freedom of expression. “Despite this, those who express support for Israel, or increasingly those that express differing or dissenting views on a broad range of topics, face horrendous intimidation, hate speech and attempts at silencing them – not just from members of the general public but, much more seriously, from the political establishment as well... Phalatse has become the latest target of this totalitarian strategy.”