Stewart reflected that "The thing I'm going to miss most about this place is the people," who he said "never fail to have my back ... This is the most beautiful place I've ever been." 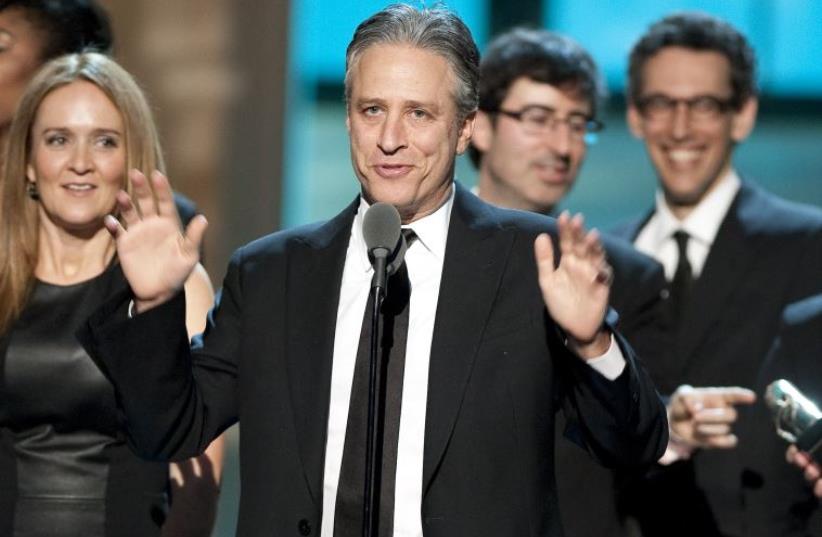 Talk show host Jon Stewart, flanked by his writers and correspondents, speaks after receiving the Best Late Night Comedy Series Award for his show
(photo credit: REUTERS)
Advertisement
Jon Stewart wrapped up his long-running "The Daily Show" on Thursday with effusive tributes to his show's staff, many on hand to see him off while political and media luminaries who served as some of the satirist's favorite targets, from Bill O'Reilly to Hillary Clinton, appeared on tape.Stewart, whose Comedy Central show racked up 18 prime-time Emmy awards over 16 years spent satirizing the eccentricities of American politics, TV news and culture, opted for a relatively straight-forward finale of filmed bits, one-liners from famous names and a soupcon of political satire.The requisite musical sendoff came courtesy of Bruce Springsteen and the E Street Band.Stewart opened the show at his desk to wild cheers, stating simply "Welcome to 'The Daily Show,' my name is Jon Stewart," adding "I've got big news. This is it, this is the final episode."An extended segment featured a bevy of the show's storied correspondents who served up commentary on Thursday night's crowded Republican presidential debate.Steve and Nancy Carell, John Hodgman, Lewis Black, Wyatt Cenac, Kristen Schaal, Mo Rocca, Jason Jones and brothers Rob and Nate Corddry were but a few who showed up to deliver quips aimed at both the politicians and Stewart himself."You're still here?" cracked Schaal. "I thought Trevor had started by now," a reference to Stewart's replacement Trevor Noah, who takes over in late September.During the bit, Noah popped up behind Stewart measuring the set and desk, at which point the outgoing host asked "Could you give me like, 20 more minutes?"Stephen Colbert, who went on to his own "Colbert Report" before nabbing the plum job replacing David Letterman on CBS "Late Show," got the last word - and the most air time.Stewart targets including Clinton, TV host O'Reilly, Secretary of State John Kerry, New Jersey Governor Chris Christie and New York Senator Chuck Schumer weighed in with a litany of often snarky goodbyes, culminating in Senator John McCain's snarled "So long, jackass."A filmed segment went behind the scenes to show staffers in cubicles, writers' rooms, the control room and office kitchen, many of them cracking wise in the process.Stewart reflected that "The thing I'm going to miss most about this place is the people," who he said "never fail to have my back ... This is the most beautiful place I've ever been."He grew emotional as he thanked his wife Tracey and his children "for teaching me what joy looks like."Stewart, 52, who has twice hosted the Oscars, has given little indication of his immediate plans after stepping away from a show whose influence on American life is disproportionate to its small nightly audience.But he promised fans, "This show isn't ending. We're merely taking a small pause in the conversation."At the end, he offered: "Rather than saying goodbye, or goodnight, I'm just going to say I'm gonna' go get a drink."