The bill for investing in Israel Bonds follows anti-BDS legislation in the state of Kansas. 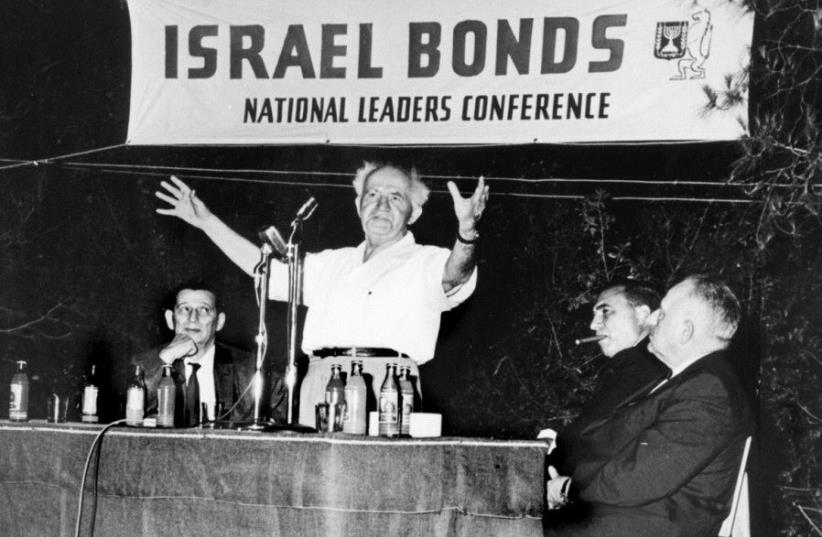 Even visionary Israel Bonds founder David Ben-Gurion could not have imagined multi-million dollar institutional investments in Israel bonds
(photo credit: ISRAEL BONDS)
Advertisement
Kansas could be the latest US state to invest in Israel Bonds, if a new bill introduced by Kansas State Treasurer Jake LaTurner is passed into law. The bill would enable the mid-western American state to invest in what LaTurner called, "a good, safe investment" with "a great rate of return." An an interview with the Garden City Telegram, LaTurner said his state is "supportive of Israel with the anti-BDS legislation... I think this naturally follows that.”
"Twenty-eight other states across the country have similar authority and have seen bipartisan support when their legislature weighs in. It is also an opportunity to strengthen a relationship with a long-time trade partner with Kansas that is very well connected in the world of business, agriculture, technology and health care," LaTurner stated, as reported by JNS.In 2017, Kansas became one of the many US states to enact a law barring boycotts of the Jewish state. However that law was challenged in 2018 following a lawsuit from a pro-BDS activist. The BDS movement - Boycott-Divestment-Sanctions seeks to economically pressure the Jewish state, charging it mistreats minorities.
Last year, for the sixth consecutive year, Israel Bonds exceeded $1 billion in bonds sales in the US. Overall, worldwide bonds sales since 1951 have exceeded $42 billion. In its history, Israel Bonds have never defaulted on a payment. Last summer American investor Warren Buffet hosted an Israel Bonds event that raised $80 million. “I’ve lived through Israel’s entire 70-year history and I believe it is one of the most remarkable countries in the world…I’m delighted to own Israel bonds,” the billionaire and internationally-renowned investor and philanthropist said.