“I’ve also lived through the horrors of a Great Depression and two World Wars, the second of which was started by a man who promised that he would restore his country it to its former greatness." 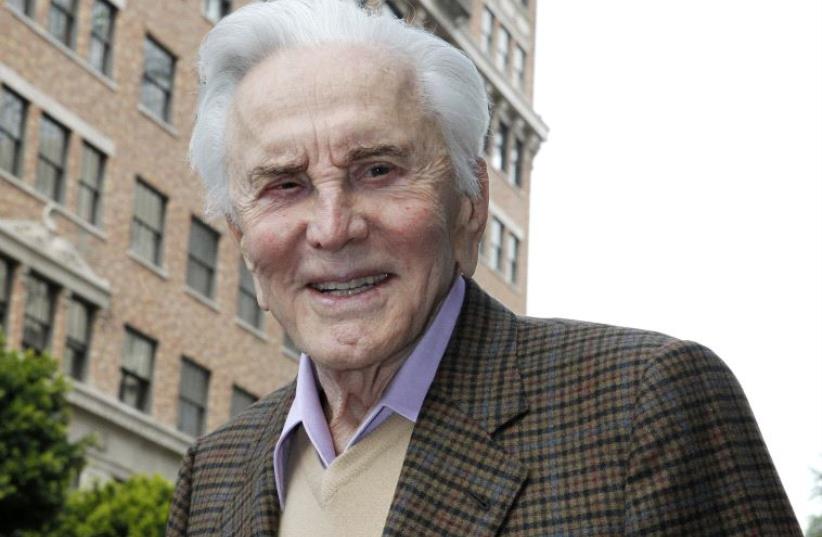 Actor Kirk Douglas poses during ceremonies unveiling international orchestral and operatic conductor Zubin Mehta on the Hollywood Walk of Fame in Hollywood, California March 1, 2011.
(photo credit: REUTERS)
Advertisement
Actor Kirk Douglas suggested he sees similarities between Donald Trump and Adolf Hitler, in an op-ed published months before his 100th birthday.“I have always been deeply proud to be an American. In the time I have left, I pray that will never change,” Douglas wrote in the article, published Monday by The Huffington Post.While not mentioning the Republican nominee by name, the Jewish actor quoted directly from a recent speech by Trump, in which he argued for ideological screening tests for potential immigrants.“These are not the American values that we fought in World War II to protect,” Douglas wrote.The 99-year-old actor, who starred in countless Hollywood hits beginning in the 1940s, compared Trump’s policy proposals to those of Hitler, saying the Republican nominee’s words “could also have been spoken in 1933,” the year the Nazi leader became Chancellor of Germany.“I’ve also lived through the horrors of a Great Depression and two World Wars, the second of which was started by a man who promised that he would restore his country it to its former greatness,” Douglas wrote, drawing links to Trump’s slogan, “Make America Great Again.”In the op-ed, Douglas recalled the challenges his parents faced, when moving to the US from Russia, as certain groups, including Jews, “felt the stigma of being treated as aliens, as foreigners who would never become ‘real Americans.'”Douglas concluded by throwing in a reference to late Jewish actress and friend Lauren Bacall.“My 100th birthday is exactly one month and one day after the next presidential election. I’d like to celebrate it by blowing out the candles on my cake, then whistling ‘Happy Days Are Here Again.’ As my beloved friend Lauren Bacall once said, ‘You know how to whistle don’t you? You just put your lips together and blow,'” he wrote.Douglas has contributed to Jewish causes and had a second bar mitzvah the year he turned 83. Last year his son, Hollywood actor Michael Douglas, won Israel’s $1 million Genesis Prize, which is known informally as the “Jewish Nobel.”