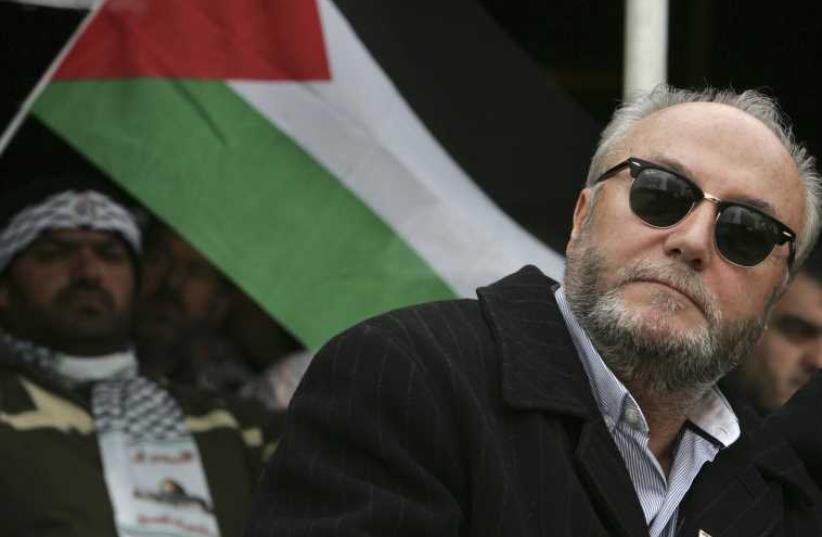 George Galloway
(photo credit: REUTERS)
Advertisement
A former British Labour MP has been mocked and lambasted on social media for posting a video of what he claimed was a “Palestinian” soccer team, which it was – the Jewish Palestine team of 1939.George Galloway is a supporter of boycott, divestment and sanctions against Israel; has continuously bashed the Jewish state; and said several times that Jews “have no right in Palestine.” He posted the video on Sunday afternoon, as England thrashed Panama during the FIFA World Cup games.In the video, which shows a British-Mandate Palestinian – and Jewish – soccer team playing Australia in 1939, stars of David are clearly visible on the team’s shirts. It turns out that the team was actually Maccabi Tel Aviv.

They say there was never a Palestine... pic.twitter.com/EhRqJEBrUb


The Australian commentator in the video even references the team as Jewish. After the Maccabi keeper saved a goal, he yells, “Save!” adding, “Then again, the Jews were always a saving race.”Galloway captioned the video: “They say there was never a Palestine...” to which people responded, “Who was the president? What was the national anthem? What was the currency [of this] so-called country?” By Monday afternoon, the post had gone viral, with more than 11,200 shares on Facebook and 1,480 retweets on Twitter.Wrote Nan Glick Klein: “This is a Jewish soccer team!! Note the stars of David on the uniforms.”The Mossad parody account retweeted Galloway’s post, highlighting that the team was Maccabi Tel Aviv in Australia in 1939. “Team roster: G. Arazi, Shmuel Ginzburg, L. Fuks, A. Schneider, F. Neufeld, S. Viner, G. Machlis, E. Pollak, A. Alembik, A. Resnik, M. Mirimovitz, L. Werner, A. Greenberg, J. Lieberman., J.Sidi, B.Mizrahi.“Traditional Arab names, eh George?” it wrote.


Steven Goldstein commended Galloway. “Nice one,” he said. “The team were all Jews Maccabi Tel Aviv FC, who played on a tour of Australia. The land was then the British Mandatory Palestine, they played as Palestine. There had never been a country called Palestine, nor until the late 1960s, never Palestinians. Enjoy your fiction.”“The Scribe” said: “It’s a Jewish team, hahahahaha you even pinned the tweet! This was a Jewish team in 1939.... You sir just proved our enduring and unending link to our homeland. Thank you and shalom!” Some named Ari wrote, “That team actually consisted mostly of Jews, who referred to themselves as Palestinians in the inter-war period when the Arabs living there did not. They thought of themselves as part of historical Syria/Damascus province.”Several memes and gifs were also posted mockingly in response to Galloway’s faux pas.A gif of Will Ferrell laughing hysterically with the words: “What an idiot,” while Naor tweeted a picture of the British Mandate flag of Palestine – a blue and white flag with a gold Star of David in the middle.Gil Winterstein tweeted a meme of Robert Downey Jr. in Tropic Thunder, saying: “You just went full retard, never go full retard.”However, there was still strong support for Galloway and several openly antisemitic comments were made as people argued the subject.“There is no such thing as Israel. It’s a man-made thing. Nothing natural about it,” said Fekir.