Earlier this month, Labour suspended yet another member for anti-Semitic comments after he posted an article claiming that 'Jews control Britain and are committing genocide on us.' 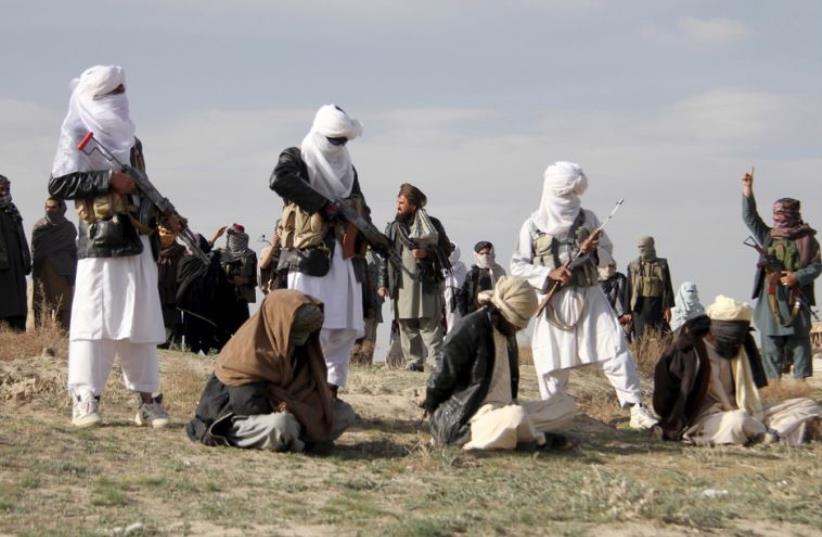 Taliban insurgents stand over three men, accused of murdering a couple during a robbery, before shooting them during their execution in Ghazni Province, Afghanistan
(photo credit: REUTERS)
Advertisement
The UK Labour official tapped by party leader Jeremy Corbyn to look into widespread anti-Semitism among members was once quoted as praising a Guantanamo Bay detainee who said that “Israel’s crimes far outweigh those of the Taliban.”The remarks were reported on Tuesday by the British newspaper Daily Mail.Earlier this month, Labour suspended yet another member for anti-Semitic comments after he posted an article claiming that “Jews control Britain and are committing genocide on us.”Musabbir Ali, a former campaign officer from East London, is one of approximately 20 members to be suspended in recent months.Ali posted on Twitter a link to a blog post titled “Timeline of the Jewish Genocide of the British People.” The blog claims that Jews “financed Oliver Cromwell’s overthrowing and beheading of Stuart King Charles I after he refused them control of England’s finances” and accuses such British leaders as Neville Chamberlain, Winston Churchill and Tony Blair of being “Jewish puppets.”Chamberlain is best known for negotiating the Munich Pact with Adolf Hitler in 1938 following the Nazi leader’s annexation of the Sudetenland. The move is widely regarded as an act of appeasement.In addition to disseminating the anti-Semitic blog post, Ali has claimed on Twitter that Israel was behind the ISIS bombings in Ankara, Turkey, in October, the Jewish Chronicle reported.Shami Chakrabarti, who is set to conduct the investigation into anti-Semitism throughout Labour, is said to have praised the detainee at Guantanamo Bay, Moazzam Begg, as a “wonderful human rights and human liberty advocate.” Begg was held at Guantanamo following his travels to Afghanistan where he built schools for al-Qaida fighter's children. The former prisoner is known for once tweeting that "Israel's crimes far outweigh Taliban's.""If this is the conclusion Shami Chakrabarti comes to on Moazzam Begg, I dread to think how she will adjudicate on Labour's anti-Semitism problem," Conservative MP Andrew Bridgen told the Daily Mail."The inquiry is rapidly losing all credibility."