Rabbi Fernanda Tomchinsky-Galanternik is a Brazilian-born psychologist; she is the third female rabbi to serve in Brazil. 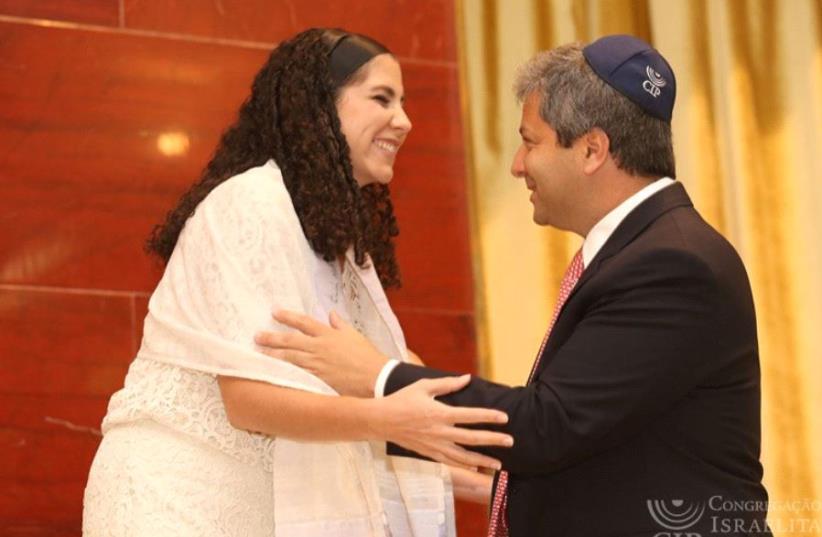 Rabbi Fernanda Tomchinsky-Galanternik at her welcome ceremony
(photo credit: FACEBOOK)
Advertisement
RIO DE JANEIRO — Latin America’s largest synagogue, the 2,000-family Congregacao Israelita Paulista in Brazil, has inaugurated its first female rabbi.Some 200 people attended the welcome ceremony for Rabbi Fernanda Tomchinsky-Galanternik held last week at the 80-year-old Sao Paulo temple, also known by the acronym CIP. Ordained in December in Argentina, the Brazilian-born psychologist and mother of one also will coordinate the synagogue’s teaching department.“CIP began to tread a path that is possible only within Judaism and particularly within such a pluralist community. But it can only be done with the presence and the action of all. I look forward to working with everyone in many different ways,” the rabbi said.Rabbi Fernanda, as she has been commonly called, is the third female rabbi to serve at a Brazilian synagogue. Rio’s Reform temple ARI was the pioneer, hiring Paraguayan Rabbi Sandra Kochmann in 2003. Brazilian-born Luciana Pajecki Lederman has been Conservative Comunidade Shalom’s rabbi in Sao Paulo since 2005.“We believe that women can perform mitzvot and participate in an equal position in religious services. Nothing is mandatory, but women are allowed to participate in an egalitarian way,” CIP President Sergio Kulikovsky stated in careful words to open the ceremony.Indeed, the synagogue founded by German immigrants in 1936 and affiliated with both the Reform and Conservative movements took several years to assume an openly progressive attitude, although it was led for decades by emeritus Reform Rabbi Henry Sobel, an iconic voice for inter-religious dialog and human rights in Brazil.“Fernanda is the symbol of a very special moment of the Latin American Rabbinical Seminary, she is the first Brazilian woman to be ordained a rabbi,” said Rabbi Stofenmacher, CEO and vice president of the Marshall T. Meyer seminary. “She joins CIP to continue the construction of the Brazilian Jewish identity.”Founded in 1962, the institution is the New York Jewish Theological Seminary’s educational affiliate in Argentina and the academic, cultural, and religious center of the Conservative Jewish Movement in Latin America.“In line with all Conservative and Reform synagogues around the world, CIP assumes a clear egalitarian position by receiving Rabbi Fernanda as a full member of the rabbinate,” said CIP Rabbi Michel Schlesinger.