WJC president speaks of his ‘open, special’ relationship with the former president. 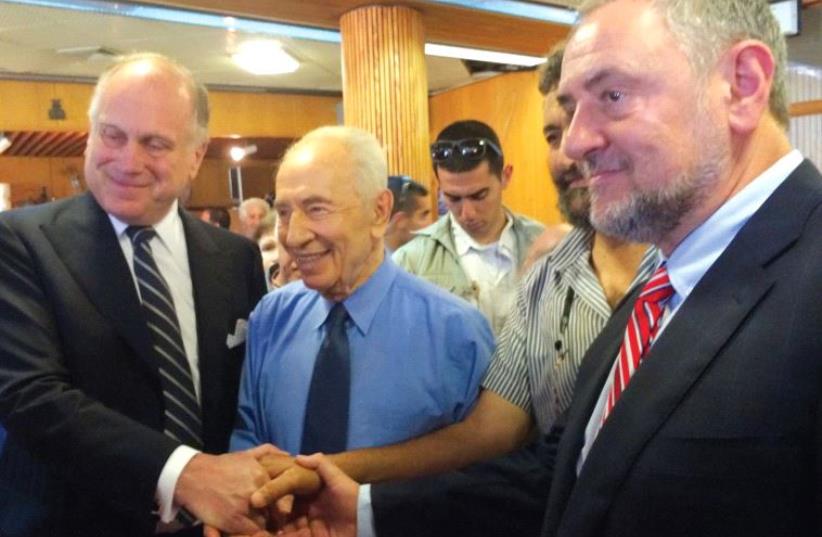 WJC PRESIDENT Ronald Lauder (left): Shimon Peres was always willing to take a chance for peace.
(photo credit: WJC)
Advertisement
KIEV – The grandchildren of World Jewish Congress president Ronald Lauder will never forget the hour-long conversation they were privy to with Shimon Peres last year.Lauder’s relationship with Peres goes back more than 30 years, and his admiration for the statesman was passed down through the generations. In a visit to Israel, one year before Peres’s death, Lauder offered his teenage grandchildren the opportunity to name one person they would most like to meet. The resounding response from both boys was Peres.“I called Peres up and he said, ‘Come right over,’” Lauder recounted Wednesday during a press briefing in Kiev. “We spent an hour with him, something my grandkids will never forget.”The WJC president said Peres spoke to children with the same ease with which he spoke with world leaders. The discussion included Peres’s favorite topics: the importance of Israel for the Jewish people, and peace. He also discussed with them the responsibility the young generation carries.“It very much changed the way they understood Israel,” Lauder affirmed, noting that the memory of that meeting is accompanying the youngsters through their school education, each keeping their picture with Peres perched on their desks.Lauder spoke with warmth about Peres in a conversation with The Jerusalem Post following a press conference about Babi Yar, in Kiev, which he opened with remarks about the death of Israel’s ninth president.He told the audience that Peres was “the moral compass of Israel.”“Today, Israel has lost one of the founding fathers,” Lauder said. “He believed strongly in the State of Israel and what it symbolized. Born in Poland, coming to Israel as a young man, he understood what Israel symbolized to the Jewish people as our homeland, a place we all feel very close to.“He believed Israel should be strong and protect itself, and he believed firmly in a two-state solution,” he added.“He did not see his dream of the two-state solution, but he did see his dream of a strong, powerful Israel, a place Jews throughout the world regard as their home.”Lauder told the Post that his relationship with Peres was “special and open.”“Wherever I was, whenever I had a question, he was always open to me, I always had a chance to speak to him,” he said.From the Negev, to Paris to New York, Peres’s unique character shone through in each of Lauder’s encounters with him.“There was something very special about him – his kind, soft voice; he was also very funny and was able to bring humor into things,” he said.Peres addressed WJC forums on numerous occasions, and in 2012 the organization awarded the then-president with the Theodor Herzl Award.“This is the highest award in the Jewish world, and the first recipient was Shimon Peres,” Lauder said. He noted that Peres was selected for the honor through a unanimous vote from 100 countries. “For 100 countries to vote unanimously is very hard – I don’t think they would have done that for Moses,” he joked.Lauder shared many conversations with Peres about peace, the two-state solution and the responsibilities of Jewish leaders. “A lot of the discussion framed what the WJC is doing,” he said.“Peres was always willing to take a chance for peace, and that’s something we have to have more and more of,” he added.