The Jerusalem Post Annual Conference will focus on US-Israel relations, the emerging Iran nuclear agreement and the rise of anti-Semitism. 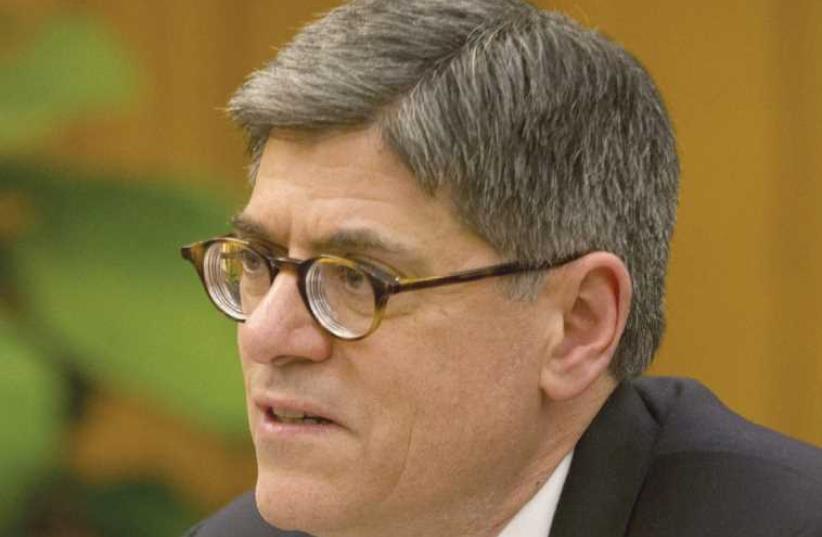 Jack Lew
(photo credit: REUTERS)
Advertisement
US Treasury Secretary Jacob J. Lew and Congresswoman Nita Lowey (D-New York) will join an already star-studded lineup at The Jerusalem Post’s fourth annual conference in New York on June 7.Lew, who is close to President Barack Obama and is third on the Post’s list of the 50 most influential Jews published along with Friday’s paper, will be among top Israeli and American leaders, security officials, and analysts to address the US-Israel relationship, the emerging Iran nuclear agreement, and the rise of global anti-Semitism. Lowey, the ranking member of the House Appropriations Committee, will also speak to the 1,500 conference attendees gathering under the banner of “Challenges Facing the New Israeli Government,” at the Marriott Marquis in Times Square.Other confirmed speakers for the daylong program include the legendary 107th mayor of New York, Rudy Giuliani, Sen. Bob Menendez (D-New Jersey), World Jewish Congress president Ronald Lauder, and Israel’s permanent representative to the UN, Ron Prosor.Among the senior figures coming from Israel will be National Infrastructure, Energy and Water Minister Yuval Steinitz (Likud), MK Gilad Erdan (Likud), Yesh Atid leader Yair Lapid, former IDF chief of staff Lt.-Gen. (res.) Gabi Ashkenazi, former Mossad director Meir Dagan, Jewish Agency chairman Natan Sharansky, former Israeli National Security Adviser Giora Eiland, and former National Security Council chairman Maj.-Gen. (res.) Uzi Dayan.“This is a wonderful opportunity for American Jewish leaders to hear firsthand about the burning issues facing the State of Israel and world Jewry,” said Ronit Hasin-Hochman, CEO of The Jerusalem Post Group. “This conference is one of the most significant gatherings of senior Israeli political and military leaders, as well as American policy-makers, who represent a wide variety of perspectives. In light of the new Israeli government and the rapidly changing Middle East, this year’s conference is slated to be especially compelling.”As part of the conference, Ashkenazi, Dagan, Eiland, Dayan and Erdan will join Post senior contributing editor Caroline Glick on a panel to debate security threats facing the State of Israel. In addition, Lauder, who has been named the president of the conference, will convene a session on the rise of anti-Semitism and the spread of radical Islam throughout the world.The panel discussion, moderated by WJC CEO and executive vice president Robert Singer, will include Ira N.Forman, the State Department’s special envoy to monitor and combat anti-Semitism; Canadian MP and former justice minister Irwin Cotler; Sara Bloomfield, director of the US Holocaust Memorial Museum in Washington; and Thane Rosenbaum, author and law professor at New York University School of Law.As a result of the WJC taking responsibility for the panel, the Post regretfully could not accommodate additional speakers it had invited to participate, including popular columnist Melanie Phillips and human rights activist Anne Bayefsky.Also as part of the conference, the Post and Limmud FSU will open a photographic exhibition marking 25 years since the USSR allowed Soviet Jews to emigrate. The exhibit traces the story of contemporary Russian Jews and contains 50 photographs from the Post’s archives, the Government Press Office, and a number of prominent photographers, including Robert A. Cumins, who have documented these historic moments.Tickets can be purchased at JPost.com.