Merkel faced pressure from her own conservatives on Monday to change course on her open-door refugee policy. 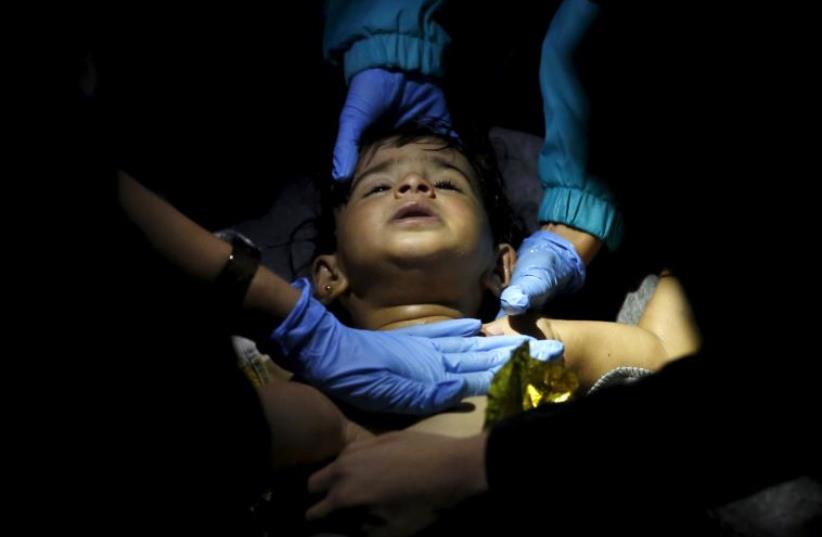 Volunteer doctors and paramedics try to revive a baby after a boat carrying more than 200 refugees and migrants sunk while crossing part of the Aegean sea from Turkey, on the Greek island of Lesbos
(photo credit: REUTERS)
Advertisement
The leader of Germany's Jewish community is calling on Chancellor Angela Merkel to impose limitations on the number of migrants being granted asylum in the country.In an interview with the German newspaper Die Welt, Josef Schuster, the president of the Central Council of Jews in Germany, said that quotas are necessary in light of the fact that many of the million refugees expected to arrive in Germany this year "come from cultures where the hatred of Jews and intolerance is an integral part."“Many refugees are fleeing the terror of the Islamic State and want to live in peace and freedom, but at the same time they come from cultures in which hate towards Jews and intolerance are fixed components," he said. "Don’t only think about the Jews, think about equal rights for women and the treatment of homosexuals.”Merkel faced pressure from her own conservatives on Monday to change course on her open-door refugee policy after an affront by the leader of her Bavarian allies drove up tensions in her ruling coalition.Roughly a million refugees and migrants fleeing war and deprivation in the Middle East, Africa and Asia are expected to arrive in Germany this year alone - the majority of those reaching Europe - and local authorities are struggling to cope.Horst Seehofer, the leader of the Bavarian sister party to Merkel's conservatives, embarrassed the chancellor by openly criticizing her on Friday for failing to put a formal cap on the number of refugees entering Germany.Seehofer's Christian Social Union (CSU) is the Bavarian sister party of Merkel's Christian Democratic Union (CDU). Together they form "The Union" but on refugee policy they have been anything but united.Those tensions began spreading to the CDU on Monday, with senior officials warning that the government must change tack."Everyone in the Union knows that we can't hold out many more weeks if every day up to 10,000 refugees and migrants come into the country," Jens Spahn, a member of the CDU party executive, told the Passauer Neuen Presse newspaper.Senior CDU member Reiner Haseloff, premier of the eastern state of Saxony-Anhalt, joined Seehofer's call to limit numbers of refugees, saying Berlin and the federal states should jointly agree on a "formal cap that takes our capacity into account"."We then have to actively communicate this number to the refugee countries and tell them if need be: More is not possible," Haseloff told Handelsblatt newspaper in an interview to be published on Tuesday.Saxony-Anhalt is among the three states holding elections in March. Baden-Wuerttemberg and Rhineland Palatinate also vote. The state elections could prove decisive in determining whether Merkel runs for a fourth term in 2017 or hands the baton to someone else after a 12-year run as chancellor.Another senior official from the CDU said privately that if Merkel did not manage to reduce the number of refugee arrivals before her party's congress in early December, she could expect a lukewarm reception.Still, Merkel was greeted by fellow lawmakers with standing ovations lasting several minutes at a meeting of the conservative parliamentary group, participants said.The refugee influx shows no immediate sign of waning. A spokesman for Germany's federal police said almost 180,000 refugees had entered the country - Europe's biggest and most vibrant economy - since the beginning of November.Divisions between Merkel's conservatives and the center-left Social Democrats (SPD) over benefits for refugees prompted coalition leaders to cancel a special cabinet meeting planned for Monday at which they had hoped to agree measures to speed up the processing of asylum seekers.