“Israel describes itself as a ‘start-up nation’ and I think Limmud is a sort of startup community." 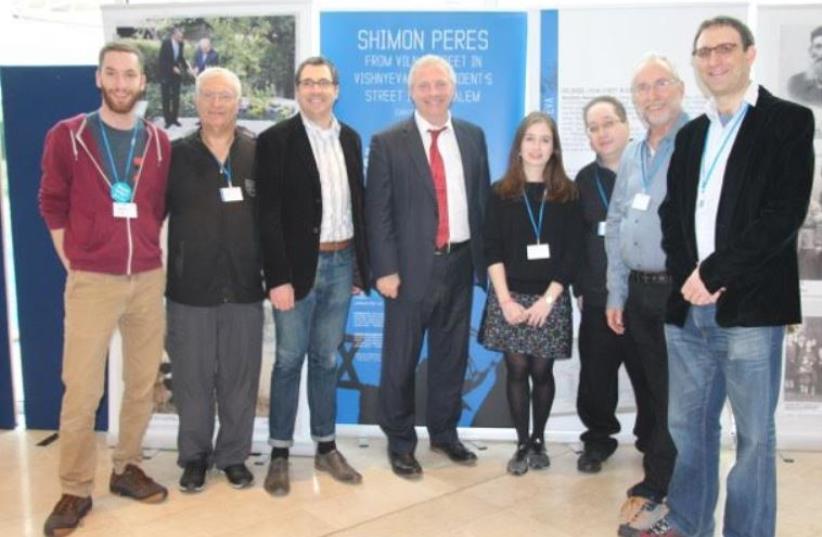 From left: Limmud Conference 2015 Co-Chair Michael Gladstone, Limmud FSU Founder Chaim Chesler, outgoing Limmud Chair Kevin Sefton, MP John Mann, Conference Programming Co-Chair Deborah Blausten, Curator Yoram Dori, and Int'l Steering Committee Chair David Bilchitz
(photo credit: COURTESY OF BATIA DORI)
Advertisement
For David Hoffman, incoming chair of Limmud, the growth of the learning organization is something truly remarkable, given the number of people it has been able to reach out to in the past year.“In 2015, 33,000 people took part in Limmud events, including the newest additions to the Limmud family in Chile, Phoenix and Tel Aviv. We are especially proud that Limmud inspired Armenians to produce a similar festival, Lasaran, last May. Onward and upward!” exulted Hoffman.Limmud, the British-Jewish charity dedicated to advancing Jewish learning in both the UK and across the world through its international branch Limmud International, is hosting its 35th annual conference in Birmingham, UK, taking place through Wednesday.The conference, the first to use counselors from Jewish communities outside the UK, marks a leap in its development.With some 500 presenters talking on a variety of subjects, including historian Debroah Lipstadt and leading UK campaigner against anti-Semitism John Mann MP, it is its largest conference yet.Discussing this year’s program, Limmud co-chair Claire Smauel, a management consultant in her day job, described it as “outstanding.” She observed that this year “participants can explore LGBTQ Jewish liturgy, examine the ferment in modern Orthodoxy, learn about BRCA and breast cancer and local Jewish-Muslim-Christian interfaith initiatives, get hands on in workshops making pickles and cooking gourmet kosher meals or master Ethiopian Jewish folk dancing.”Having begun as a small event attended by 75 Jewish educators in 1980, the conference and organization have grown dramatically in size, with 2,754 people in attendance this year and more than 400 participants from 28 countries from outside the UK.Alongside its annual conference, Limmud has emerged as international movement, located in 41 countries with 83 groups around the world. Limmud International chairman David Bilchitz sees the formula for its success in the organic nature of its different branches’ development.“What Limmud has done has opened up the conversation and open up a wider space in which all Jews can find themselves and have success in changing communities and unleashing a certain creativity” he said. “Israel describes itself as a ‘start-up nation’ and I think Limmud is a sort of startup community’.A significant aspect of Limmud is its basis in volunteers, who run both the conference in the UK and the activities of its various manifestations in the world. This opportunity, available to all involved with Limmud, is described by outgoing chairman Kevin Sefton as providing what he terms “a chance to do,” noting the annual conference is a direct result of the efforts of a group of 30 steering group members and 300 volunteers.A direct product of Limmud is Joanna Ish-Horowicz, one the current conference’s three co-chairs. A medical resident based in London, Ish-Horowicz has been attending Limmud since her parents took her to her first conference when she was only 6 months old in 1986.“I met my husband here, he’s co-chaired the conference [previously], and our baby is due in the spring, so I’ll soon be bringing my own six-month old baby to Limmud!”, she said told The Jerusalem Post.In Sefton’s eyes, the role that Limmud plays for 21st century Jews is in its ability to provide a forum, one that is “a place where people can become comfortable with their Judaism.”Expanding, he suggested that “A lot of people’s Jewish practice has been ‘you ought to do this you ought to do that.’ What Limmud does is say that ‘whatever you want, you can do it.’” Noa Genzler, an English major in her final year of study at the University of Cambridge, echoed similar sentiments, stating that Limmud had made her “less embarrassed about being Jewish.”Speaking to the Post, she discussed her joy at the wide range of Jewish activities she was able to take part in at the conference, mentioning of particular note a session on ‘Hasidic hip-hop.’ In Genzler’s opinion, what Limmud provides is a reality that many of those in diaspora don’t always possess: “When you’re surrounded by Jews, you can talk about Jewish things.”