London police have a special "L'Shanah Tovah" message for the Jewish community. 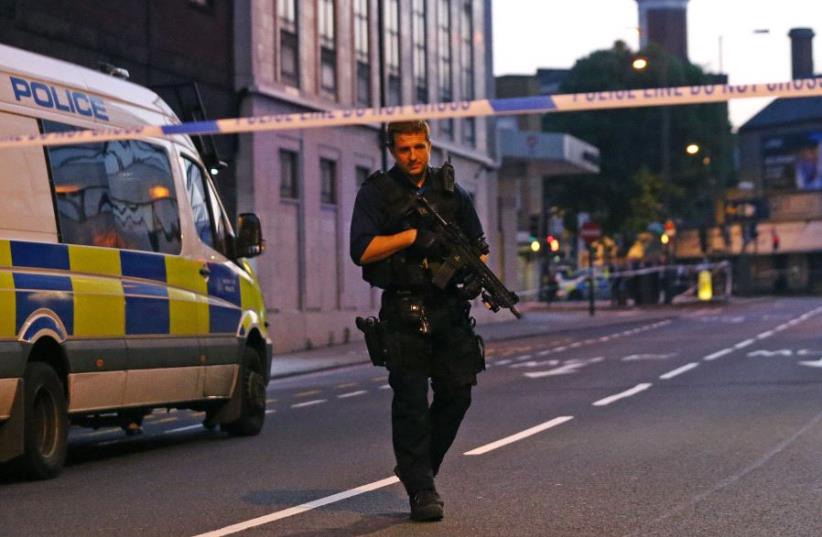 An armed police officer attends to the scene after a vehicle collided with pedestrians in the Finsbury Park neighborhood of North London, Britain June 19, 2017
(photo credit: REUTERS)
Advertisement
London's Metropolitan Police is on higher alert in the Jewish communities ahead of the High Holy Days, a Jewish volunteer community group posted on Wednesday.

#ShanahTovah and a #HighHolyDays message from @MetPoliceUK to the Jewish community, ahead of #RoshHashanah, the Jewish New Year. #ShanaTova pic.twitter.com/slNce7sw9c

Shomrim UK, a Jewish volunteer community safety patrol organization based in England, tweeted a letter they received by Metropolitan Police saying that London police will be working closely with the Jewish community in the coming weeks "to provide an extra level of visibility and vigilance." This comes after Metropolitan Police arrested two more suspects on Wednesday in the investigation of the September 15 terror attack at London's Parsons Green train station, that Islamic State claimed responsibility for.

A home-made bomb on a packed rush-hour commuter train in London engulfed a carriage in flames, but apparently failed to fully explode, injuring 22 people in the attack.However, the letter to Shomrim UK stated that this raise in security is "not in response to a raised threat." The British police added that it is an opportunity to work closer with London's Jewish community and to ensure a "happy and safe holy day period."London Mayor Sadiq Khan is answering questions about security at the London Assembly's Police and Crime Committee on Wednesday morning.

This morning I’ll be answering questions from the @LondonAssembly on policing and crime in London. Watch here → https://t.co/2RqUXRqw6K