The cabinet is split between men and women, and includes the child of a holocaust survivor. 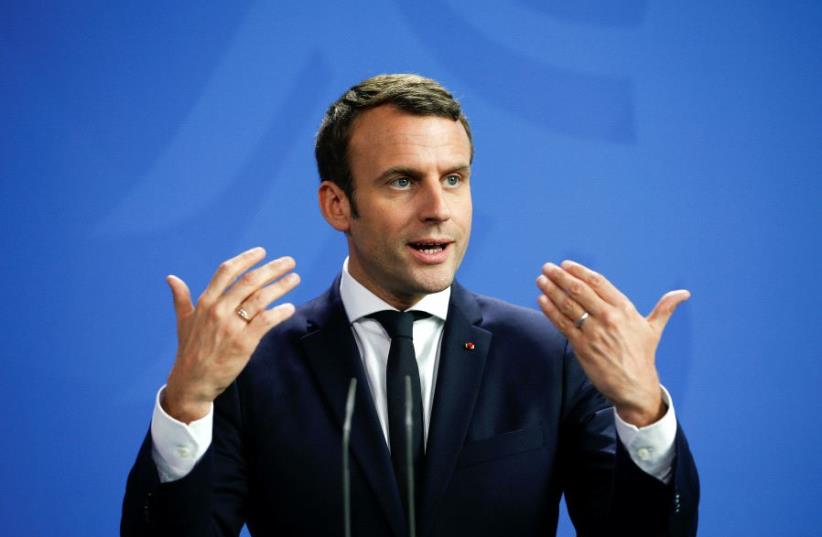 Emmanuel Macron
(photo credit: REUTERS)
Advertisement
French President Emmanuel Macron presented a diverse cabinet of 22 ministers, including a Jew, a Muslim and both advocates and critics of Israel.Macron, a centrist who had served in governments led both by Socialists and Republicans before his election on May 7 on an independent ticket, appointed on Wednesday as his foreign minister Jean-Yves Le Drian, a former defense minister under the previous president, Francois Hollande of the Socialist Party.In 2014, Le Drian wrote in a statement that France “condemns” the firing of rockets into Israel “but requests that Israel” minimize any harm to civilians in its attacks on Hamas.Macron appointed Edouard Philippe, a lawmaker from the moderate wing of the main center-right The Republicans party, as prime minister.Macron appointed to health minister Agnes Buzyn, a physician born to a Polish Jewish couple. Her father survived the Holocaust and her mother was born in France shortly after the war to Jewish immigrants from Poland. She is one of 11 women whom Macron made ministers – exactly half of his cabinet.Francois Bayrou, a billionaire-turned-politician who has in the past criticized what he has called Israel’s “arbitrary and unjust arrests of Palestinians,” among other alleged actions by the Jewish state, was named minister of state – a position equivalent to minister without portfolio which nonetheless suggests seniority.Bruno le Maire of The Republicans party was made minister of the economy. Pro-Israel activists in France regard him as a staunch ally and defender of the Jewish state, according to the right-leaning news site Alyaexpress.Last year, le Maire criticized Hollande’s government for supporting a vote at the United Nations educational branch, UNESCO, which ignored Jewish ties to Jerusalem. He called it “a moral and political error.”Marielle De Sarnez, a former lawmaker at the European Parliament who in 2010 visited Hamas-controlled Gaza and co-authored a letter urging Israel to lift its blockade of the area, was appointed as the minister in charge of European affairs. The letter she co-signed did not mention Hamas’ violations of human rights and terrorist activities. It also praised the work of UNRWA, a UN agency which Israel in those years accused of incitement, as “fantastic.”Macron appointed Mounir Majhoubi, a 33-year-old entrepreneur whose family is Muslim and has Moroccan roots, to be France’s minister in charge of digitalization. Majhoubi in 2010 opened a successful high-tech firm together with his then business partner, the French-Jewish developer Marc-David Choukroun.