Christian Gerin was taken off the En Marche ticket Friday in connection with messages he wrote in 2013, throughout last year and this year on Twitter. 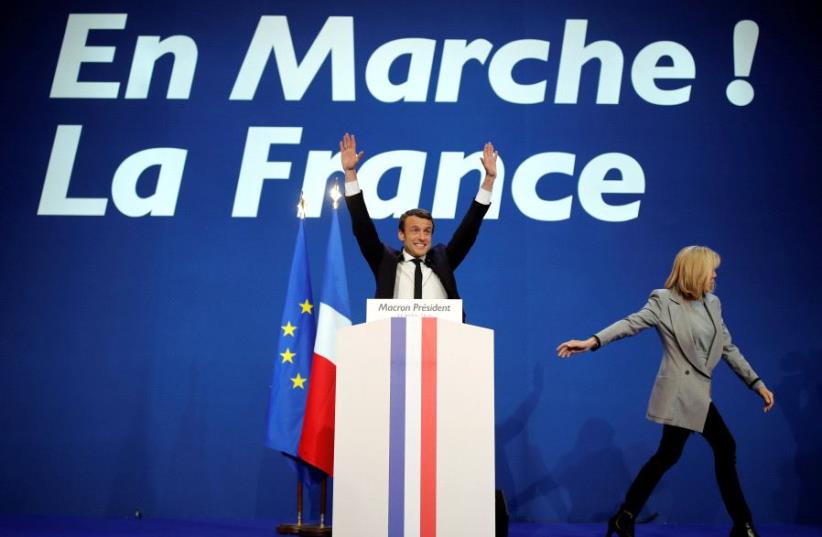 French President Emmanuel Macron, head of the political movement En Marche!
(photo credit: REUTERS)
Advertisement
The party of France’s president-elect Emmanuel Macron withdrew from its parliamentary elections ticket a politician who made statements deemed antisemitic.Christian Gerin, a journalist, was taken off the En Marche ticket Friday, a day after he was nominated to represent the party in next month’s elections for the French parliament, in connection with messages he wrote in 2013, throughout last year and this year on Twitter.In one tweet, flagged as “antisemitic” by the LICRA watchdog against antisemitism and racism, he wrote: “When will there be a separation between CRIF and state?”CRIF is the umbrella group of French Jewish communities, whose critics say wields too much influence over French politicians.He also wrote that Manuel Valls, a former prime minister under outgoing President Francois Hollande, is “virulently Zionist, racist and an Islamophobe.” Gerin also wrote on Twitter: “The only solution: BDS.” Laurence Haim, a spokesperson for en Marche, confirmed to the France Bleu that the suspension was over the tweets.Advocating for a boycott of Israel, which is the ideology of the Boycott, Divestment and Sanctions movement, is illegal in France, where it is considered a hate crime.LICRA, which is one of France’s most best known and oldest civil rights watchdogs, said in a statement earlier this week that there are “clear antisemitic connotations” to the statements by Gerin.Last year, Gerin wrote after a terrorist attack in Nice, that “now we must oppose the appropriation of it by Israel and its expressions of support.”Israeli Prime Minister Benjamin Netanyahu following that attack offered his condolences to the French people and equated it with terrorist attacks in Israel and beyond.