A Jewish gym owner from Melbourne became the target of death threats after criticizing Islamist militants. 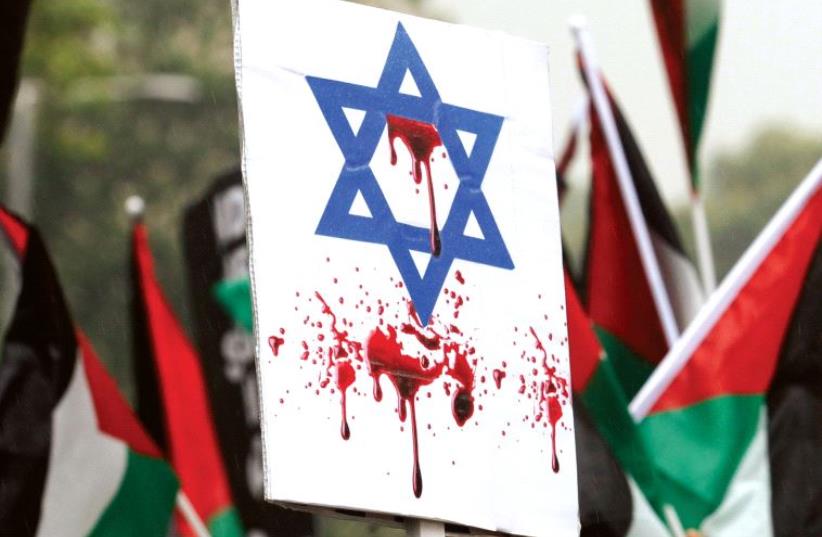 AN ISRAELI FLAG stained with fake blood at a pro-Palestinian rally in London.
(photo credit: REUTERS)
Advertisement
A former IDF soldier living in Australia became the subject of explicit death threats over the weekend after posting an online video criticizing Islamist militants, The Daily Mail reported Sunday.Jewish gym owner and Melbourne resident, Avi Yemini, shared a video on his Facebook wall expressing dismay over recent attacks in Egypt and the Philippines tied to Islamist militants, claiming that "Ramadan is the month of Jihad.""Ramadan is not the same" as Christmas or Hanukah, he adds.
Shortly thereafter, the ex-IDF sharpshooter was sent a message from a man reportedly from the Sydney suburb of  Parramatta,  threatening to "make sure you drown in your own blood your [sic] Jewish scum.""Do you think your [sic] a mad c***. Talking about Islam like that," starts the message. "Let's meet up and have a chat about Islam. U [sic] think your [sic] some tuff [sic] guy aye well [we] will see how tough you are.""I promise u [sic] I'm gana [sic] see you round and when I do I'm gana [sic] make sure you drown in your own blood your [sic] Jewish scum," it adds. 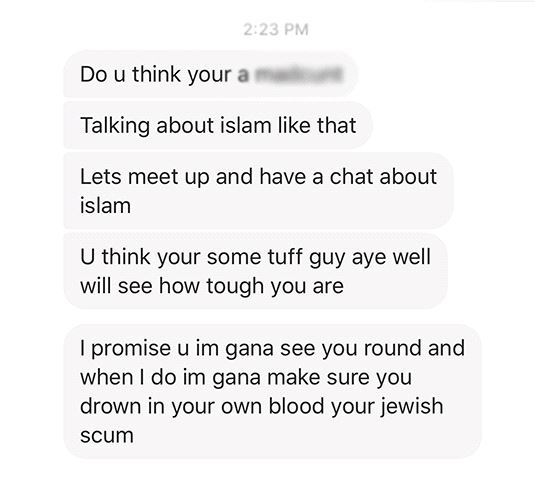 Screenshot from threating message sent to ex-IDF soldier Reached for comment by the Daily Mail Australia, Yemini said of the message sender: "He's clearly not too happy, but he's kind of proved my point."  "You can scream and shout that you're part of a religion of peace, but in the same sentence you threaten you're going to murder someone," he added."For any religious man to sit behind a computer and think it's okay to talk about murdering someone else, it's mind boggling."Yemini said that he forwarded the threatening message to Victoria police, but holds little hope for a resolution on the matter. In March, Yemini revived a similar threatening phone call, but has yet to see police make any arrests in the matter."I've forwarded it all through to the police," he said, adding "I just hope [the people threatening me] don't shoot me in the meantime."