"There is no Ukrainian history without Jewish history." 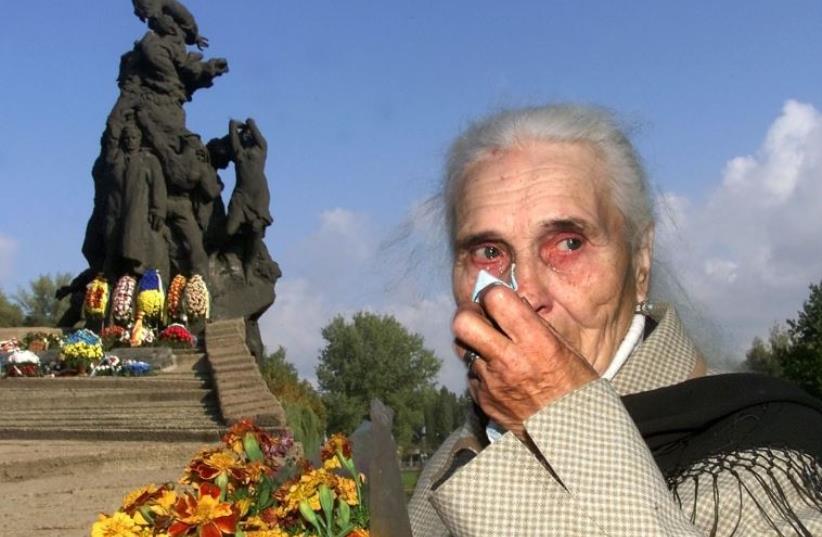 Ludmila Pynikh, 77, grieves during a mourning ceremony at Babi Yar in Kiev [File]
(photo credit: REUTERS)
Advertisement
KIEV – “If you force Jewish history out of Ukrainian history, then there is no Ukrainian history that makes any sense,” prominent Holocaust scholar Prof. Timothy Snyder said on Monday at a week-long conference in Kiev dedicated to the 75th anniversary of the Babi Yar massacre.The ravine of Babi Yar, located in the Ukrainian capital, is the site of mass killings by Germans and their collaborators.Among the 150,000 victims thought to be buried there are 33,771 Jews who were killed in just two days, September 29-30, 1941.Snyder, author of the prize-winning book Bloodlands, delivered the keynote speech at the opening of the symposium, hosted by the Ukrainian Jewish Encounter (UJE). The conference was one of many events being held around the city. The high-level commemorations stand in stark contrast to Ukraine’s Soviet period, during which Ukrainians knew very little about their country’s Jewish history, buried then under Soviet propaganda. Ukraine gained independence in 1991.
Artwork at the conference in Kiev dedicated to the 75th anniversary of the Babi Yar massacre (UKRAINIAN JEWISH ENCOUNTER)“People today know more than they knew 25 years ago, even though we have less and less witnesses,” Joseph Zissels, the head of Ukraine’s Jewish community, said in introductory remarks.Snyder emphasized the importance of having a clear vision of the larger picture of history. “We cannot forget other Ukrainian victims,” he said.Soviet prisoners of war and handicapped Ukrainians, among others, should also be remembered, Snyder said.“We cannot forget those things,” he said. “Even those primarily concerned with the history of the Holocaust should remember those things. Without the Soviet background or other German crimes, the Holocaust makes even less sense.”Snyder emphasized that recognizing the suffering of other Ukrainians under German or Soviet rule does not detract from the Holocaust.Likewise, he said, for those concerned only with Ukrainian history, the memory of the Holocaust is vital.“If you choose to bear no responsibility, then you’re also choosing not to have a history – some responsibility must be borne,” he said, adding that the same rule applies to all countries. “It has to do with defining yourself as a nation. Nations are not built upon forgetfulness, but upon responsibility. It’s never too late to show mercy.”UJE co-director Adrian Karatnycky said: “Ukrainians who survived the terrible events in the 1930s must understand and realize not only their tragedies but also the tragedies of their neighbors.About one-third of the total population of Ukraine was killed in World War II, mainly by Germans. Some 90% of the Jewish community was exterminated.”Talking to a group of journalists on the sidelines of the conference, Karatnycky discussed the issue of Holocaust knowledge among Ukrainians.“Ukraine has a Soviet version of history, a glorious struggle for victory, with very little discussion of victimhood,” he said. “So Ukrainians never got used to talking about the Holocaust as the Holocaust. It didn’t emphasize the number of civilian casualties. Now they are writing a new history and Ukraine needs to find a way in accepting that narrative.”Karatnycky said while he did not think that process was complete yet, it was an easier task for the younger generations who don’t bear any of the guilt older generations might carry.
Advertisement
Subscribe for our daily newsletter