Rabbi escapes with one Torah scroll. 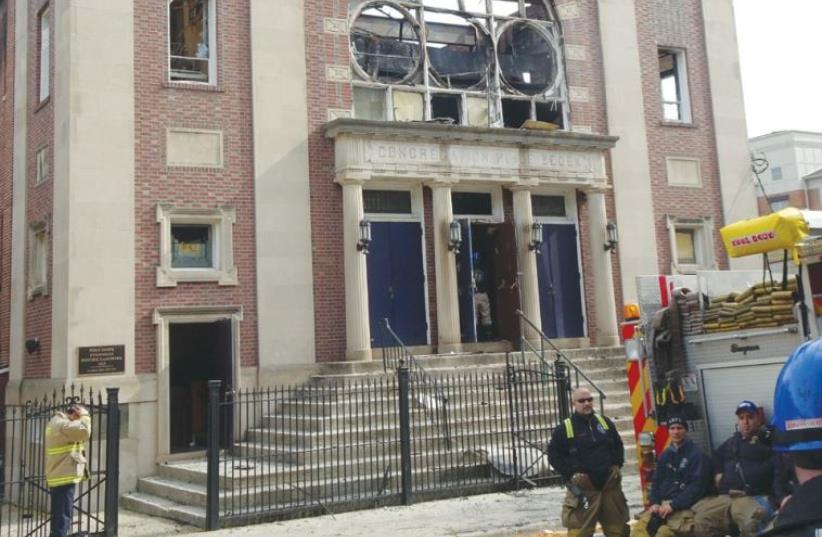 CONGREGATION POILE TZEDEK in New Brunswick, New Jersey, yesterday, after the blaze.
(photo credit: STEPHANIE GRANOT)
Advertisement
NEW BRUNSWICK – The block where Congregation Poile Tzedek stood for nearly a century remained closed to the public on Saturday morning, as police and fire investigators continued to sift through the wreckage of the gutted synagogue.Witnesses described seeing the synagogue’s longtime rabbi, Abraham Mykoff, race into the building as raging flames blew out second and third floor stained glass windows shortly before Shabbat, and minutes later emerge holding a Torah as the ceiling collapsed behind him.The other three Torahs were destroyed along with the Orthodox synagogue that was declared a National Landmark in 1995, and all its contents.“The cause of the fire is under investigation,” said Jennifer Bradshaw, spokeswoman for the City of New Brunswick, which is located 43 km.southwest of New York City.The fire started on the third floor of the building, local media reported, and proceeded to the basement as well as the roof, which had partially collapsed. Surrounding buildings were evacuated.No injuries were reported.