The human rights activist, international lawyer and writer is also well-known for his staunch Israel advocacy. 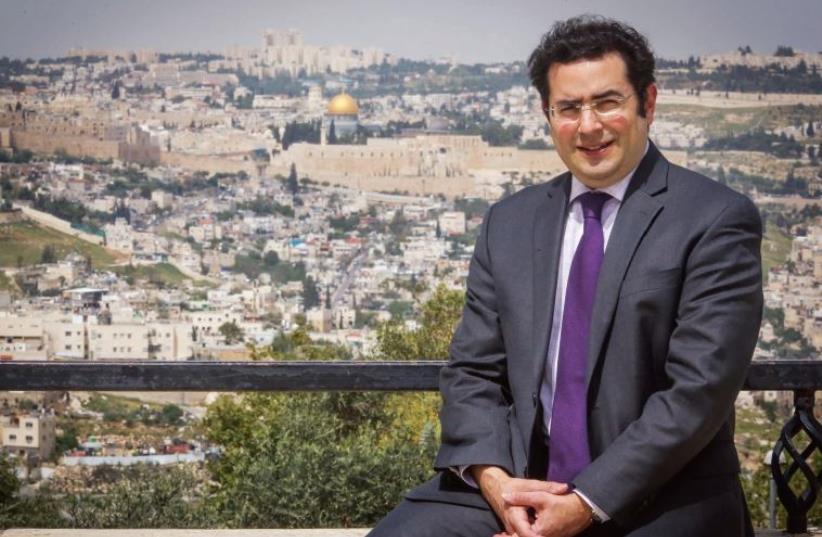 Hillel Neuer takes in a sweeping view of Jerusalem from the East Talpiot promenade
(photo credit: MARC ISRAEL SELLEM)
Advertisement
Hillel Neuer, who has spent decades fighting for human rights, has been named a recipient of an honorary degree from McGill University.McGill is considered one of Canada’s top universities and is where Neuer received his bachelor of law and civil law degrees.Neuer is the executive director of UN Watch and has testified regularly before the UN Human Rights Council on behalf of victims in Darfur, China, Russia and Venezuela, as well as for the cause of peace in the Middle East. He will be awarded an honorary doctorate of laws at the university on June 5.He also is the founding chairman of Geneva Summit for Human Rights and Democracy, a coalition of 25 NGOs “giving a voice to the voiceless.”Neuer “has been an innovator at the UN in creating global platforms for courageous dissidents and champions of human rights from around the world,” the university said in a statement.“As founder and chair of the annual Geneva Summit for Human Rights and Democracy, he leads a cross-regional coalition of 25 non-governmental organizations that over the past decade have successfully placed an international spotlight on urgent human rights situations,” the statement said.“The Honourable Irwin Cotler, human rights advocate and lawyer, has said that ‘if you want to pursue justice, you must feel the injustice around you,’” the statement added, and said Neuer “lives by those words and has been a voice for those without one. UN Watch has been a lone voice for truth and for justice both at the ‘Parliament of Man’ and in the international media.”The international lawyer and writer is also well-known for his staunch Israel advocacy and has called out the UNHRC several times for hypocrisy and double standards.Neuer is known for being banned in 2007 from giving speeches at the UNHRC after he criticized the body for lying, moral corruption and a pathological obsession with scapegoating Israel.In response to the news of the honorary degree, Neuer wrote a post on Facebook on Monday saying, “I will always remember when I received my letter of admission to McGill Law School, and now also when the principal of McGill called to inform me of this award. I am deeply honored, and looking forward to delivering my convocation address in Montreal next month.”Human rights activists, dissidents and former political prisoners from around the world took to Twitter to congratulate Neuer on the award.Chinese political activist and dissident Yang Jianli said, “Congratulations to Hillel Neuer on being selected by McGill University for an honorary doctorate of law. Hillel surely deserves such an honor. Hillel is one of the world’s most committed, energetic human rights leaders.”Ugandan feminist and social activist Kasha Nabagesera tweeted that the degree was a “well-deserved honor. On my own behalf & that of... LGBT people in Ug[anda] & [the] world at large, I thank you for always giving us a platform & a network to share our plight, joys & hopes for a more secure, peaceful and a just world. I congratulate you comrade.”