Mayhem broke-out late Thursday evening in the Riviera city when a truck driven by a 31-year-old Franco-Tunisian man rammed into a crowd gathered to celebrate the holiday. 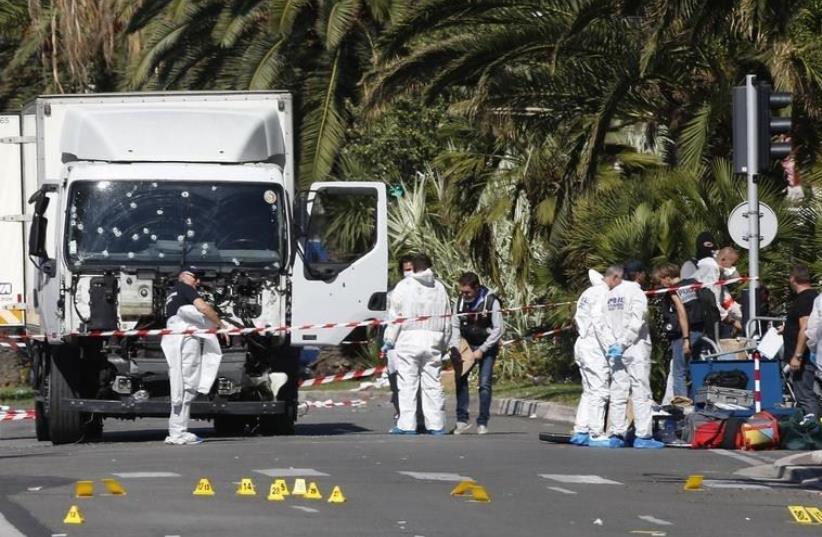 Investigators continue at the scene near the heavy truck that ran into a crowd at high speed killing scores who were celebrating the Bastille Day July 14 national holiday on the Promenade des Anglais in Nice, France, July 15, 2016.
(photo credit: REUTERS/ERIC GAILLARD)
Advertisement
A Magen David Adom representative stationed in Nice, France said Friday afternoon that two elderly sisters belonging to the local Jewish community are missing following the Bastille Day terror attack that killed 84 people.
Bruno Israel Lellouche told The Jerusalem Post that the siblings have reportedly not made contact with family members since Thursday's tragedy where spectators had gathered to watch a fireworks display.
Lellouche himself was out for dinner with his wife on the evening of the attack. They went to get ice cream for dessert on the Promenade des Anglais, when they suddenly heard gunshots and saw crowds of people running.
They took cover in a restaurant where they remained for two hours, until police came to tell them it was safe to come out. "Everyone was down on the ground, there were lots of babies, it looked like a war," he told The Post.

President of the Jewish Community in Nice Niddam Maurice later told The Post that an open investigation was still underway by local authorities.
"We know at this time that two women have not been found. It is very difficult at the moment to say anything. We had a young woman and a young man who were missing earlier and then were found," she said.
"For the moment what we know is that no Jews have died."
Mayhem broke-out late Thursday evening in the Riviera city when a truck driven by a 31-year-old Franco-Tunisian man rammed into a crowd gathered to celebrate the holiday.
The attacker was reportedly named as Mohamed Lahouaiej Bouhlel, according to British daily The Daily Mail, but the information has yet to be confirmed.
The Representative Council of French Jewish Institutions (CRIF) said it was "horrified" by the bloody attack that struck Nice on Bastille day, an event of national unity.
"The hydra of terrorism has struck again," CRIF stated. "More than ever, the national community must be united and strong. The fight against terrorism must also be global. The terrorists have the same objectives in Paris, Nice, Brussels, Istanbul, Jerusalem, Tel Aviv, and around the world."
CRIF expresses its solidarity with the city of Nice and to its population, and expresses its condolences to the families of the victims and healing wishes to the many injured.
CRIF Executive Director Robert Ejnes, added that it is important for people to realize that  terror attacks around the world are of the same nature, be they in France or Israel.
“There is a habit that when it happens in Israel, it seems to be different for the French press and the French people,” he told The Post.“We want to remind everyone that these attacks against democracy and civilization are the same if they happen in Tel Aviv or in Nice
Advertisement
Subscribe for our daily newsletter