The Dodgers are smitten by the power-hitting, slick-fielding center fielder. 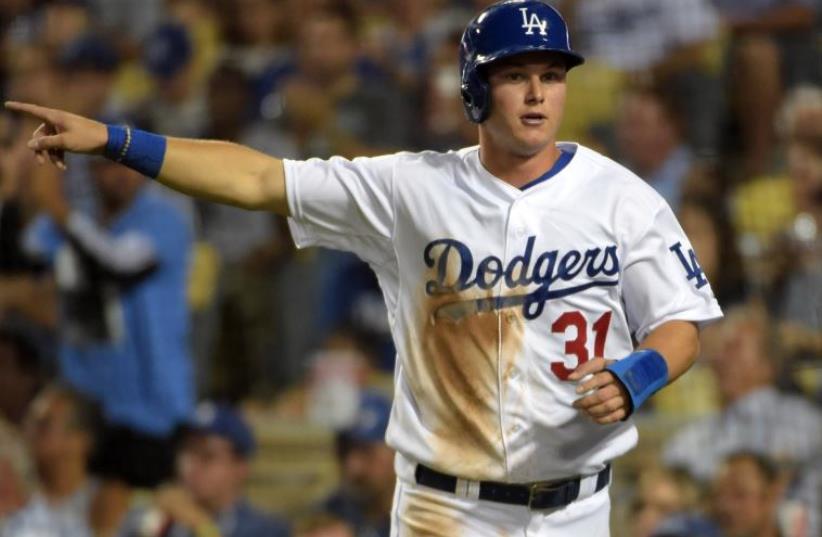 Los Angeles Dodgers center fielder Joc Pederson, Aug 12, 2015
(photo credit: REUTERS)
Advertisement
WASHINGTON – Ask Los Angeles Dodgers’ rookie outfielder Joc Pederson how his season is going, and he’ll talk about the team.“We’re playing great baseball, and that’s something we’re looking to continue to do,” a shy and wary Pederson told JTA recently following a spirited game of dice with teammates Justin Turner and Scott Van Slyke before they faced the Nationals here. “It’s not how you start but how you finish, make a run and win the World Series.”His Dodgers are primed to make a postseason appearance, holding an 8 1/2-game lead over the defending World Series champion San Francisco Giants in the National League’s Western Division following the games of Wednesday. Pederson, 23, has made a solid contribution to the effort, notably before the All-Star break, when he slammed 20 of his rookie-leading 24 home runs to earn a berth on the N.L. squad.The Dodgers are smitten by the power-hitting, slick-fielding center fielder, who had been a favorite for the league’s Rookie of the Year Award prior to a prolonged slump.Pederson is “pretty much what we expected – and we expected a lot,” said Dodgers pitching ace Clayton Kershaw. “We knew we were getting a guy who’s a gamer, [who] wants to play every day, plays great defense in center field … and, offensively, walks a lot and can hit the ball a really long ways – and does it pretty frequently.” So often that at the Home Run Derby during the All-Star break, the lefty-swinging Pederson drilled 39 baseballs into the bleachers in Cincinnati, very nearly besting co-finalist Todd Frazier of the Reds before the hometown hero prevailed.With each Pederson blast that night, his mother Shelly’s cellphone vibrated in the stands from all the incoming text messages. Many of those congratulations came from Shelly’s girlfriends from her long-ago journey in the minor leagues that in 1985 briefly landed her husband and Joc’s father, Stu, in the major leagues, where he also played outfield for the Dodgers.It was Shelly who in 2012 went to Congregation Beth Sholom, the San Francisco synagogue where her late father, Larry Cahn, had his bar mitzvah, to produce proof of Joc’s Jewish heritage so he could play for Israel’s World Baseball Classic team that autumn.He batted second and played right field in the WBC and, despite his youth – Pederson was 20 and in A ball, several rungs below the majors – offered this encouragement to teammates before the opener, Israeli pitcher Alon Leichman recalled: “Don’t be afraid to be good.”Pederson has been plenty good as a professional, rising in the Dodgers’ system to win the Pacific Coast League’s Most Valuable Player award last year, leading the circuit with 33 homers, sandwiched by appearances on the Los Angeles roster before making his major-league debut in September. In the off-season, the Dodgers traded Matt Kemp to San Diego to open the center-field job to Pederson, who has impressed many with his glove.“He’s really solidified us defensively,” said his manager, Don Mattingly.Dodgers’ broadcaster Rick Monday, who starred at the position for the team in the 1970s and ’80s, said Pederson “can run it down in center field with anybody.”Despite his problems at bat in late July and August, Pederson remains among the rookie leaders in runs scored and runs batted in, is leading in walks and is second in plate appearances. His early prowess helped earn Pederson the start in left field in the All-Star Game.Pederson has seen his average dip to .215 as of Wednesday. And he’s also been prone to the strikeout.Mattingly, a premier power and contact hitter for the New York Yankees in the 1980s and ’90s, believes that Pederson can knock off 50 strikeouts a season by refining his swing beginning this winter.“He’s got to put the ball in play to get a run in or move the runner, get the runner in from third,” Mattingly said. “It’s really good for him and for us if he’d understand how to do that.”Pederson learned the game from his father along with elder brother Tyger, 25. Stu Pederson erected a batting cage in the backyard of the family’s home in Palo Alto, California, led drills and viewed videos of elite hitters with his boys.When Stu coached for Palo Alto and Cupertino high schools in Northern California, the brothers would serve as the batboys.“We’d enjoy the moment. Later we realized how fortunate we are to have a dad … to teach us all those lessons from a young age,” said Tyger, an infielder for the San Rafael Pacifics, an independent team based north of San Francisco who is being recruited to work as a coach in the Israel Association of Baseball.Said Joc of their father, who is coaching this summer in Alaska, “It was just good father-son bonding time. I wouldn’t be where I am without him.”The boys have a younger sister, Jacey, a high school soccer star who has accepted a scholarship to play at UCLA. Their eldest sibling, brother Champ, 27, nearly stole the show at the Home Run Derby.That’s because of the embrace he received on live television by another contestant, Angels’ slugger Albert Pujols. Champ Pederson, like Pujols’ daughter Isabella, has Down syndrome.The Pedersons first met the Pujols family during spring training in Phoenix at the premiere of “Where Hope Grows,” whose lead actor has Down syndrome. Pujols’ foundation helped fund the feature film.“Albert’s a special human, and he does a lot for Down syndrome, so it was a pretty special night for everyone,” Joc Pederson said. “I think that was bigger than the Home Run Derby.”