Mexican envoy who walked out on anti-Israel UNESCO debate honored 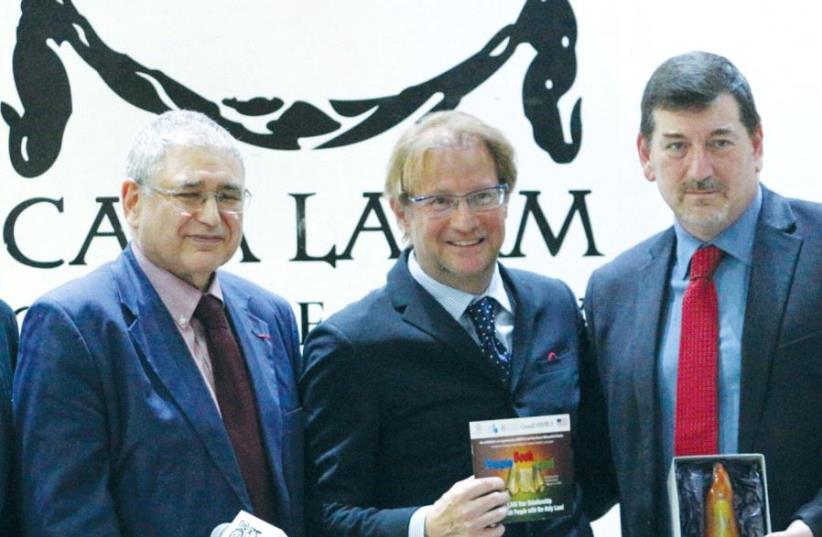 ANDRÉS ROEMER (second right) receives his award in Mexico City on Friday, flanked by Simon Wiesenthal Representative for Latin America Ariel Gelblung (right), Director of International Relations at SWC Shimon Samuels (second left) and Isaac Ajzen, director of Jewish news source diariojuido.com
(photo credit: RAY FIS)
Advertisement
The Simon Wiesenthal Center has honored former Mexican ambassador to UNESCO Andrés Roemer for his “tireless work in defense of human rights,” at a ceremony in Mexico City.Roemer was fired in October 2016, after he walked out of debate on a UNESCO resolution that ignored Jewish and Christian ties to the Temple Mount, over disagreement with his government’s initial decision to support it. Mexico subsequently withdrew its support for the resolution.The award was presented on Friday to Roemer by Director of International Relations at SWC Shimon Samuels, SWC Representative for Latin America Ariel Gelblung and Isaac Ajzen, director of Jewish news source diariojuido.com.They commended Roemer for his “work and struggle against unjustified causes, such as those who seek to erase the past and the roots of humanity, as well as for his firm courage in defending his convictions in the framework of his role... as well as for his unbreakable and uninterrupted defense of human rights.”The event was attended by politicians, intellectuals and cultural figures.Roemer was honored last month by the American Sephardic Federation, with the International Sephardic Leadership Award at the Center for Jewish History in New York.“When confronted by the recent UNESCO resolution that sought to erase Jerusalem, Israel’s Jewish and Christian history, ambassador Roemer knowingly risked his position to voice and vote his conscience,” the federation stated.“While the resolution still passed, ambassador Roemer did not forget Jerusalem and his moral courage convinced several countries, including his own, to seek to reverse the resolution’s ill-considered position against historical truth and the possibility of peace,” the federation said.