What were Mexican laborers doing at an anti-gay Jewish protest in New York?‏‎‏

The laborers wore Tzitzit, black hats and even fake peyot [sidelocks] as they held anti-gay signs. 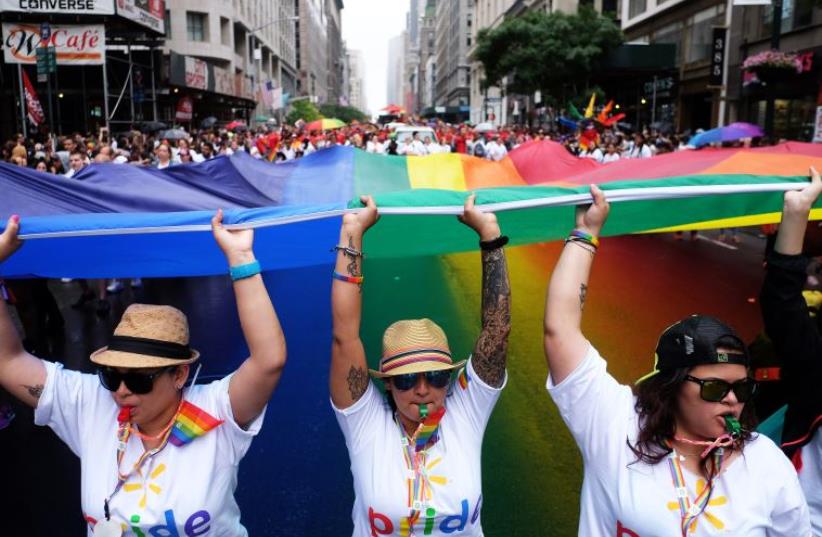 New York City gay pride parade of 2015
(photo credit: JEWEL SAMAD / AFP)
Advertisement
An extremist Jewish group paid non-Jewish Mexican laborers to protest on their behalf at the New York gay pride parade Sunday and hold up anti-gay signs, the New York Times reported.The report showed a picture of the paid protestors wearing Tzitzit, black hats and even fake peyot [sidelocks] in the style worn by hardline ultra-orthodox sects of Judaism as they stood behind a police barricade at the parade.When asked by if they were Jewish, one of the protestors openly replied in the negative and stated that they were Mexican laborers paid to be there. The signs they held all bore the logo of the Jewish Political Action Committee and had slogans such as "Judaism prohibits homosexuality" and "G-d created Adam and Eve not Adam and Steve."The paid laborers took the brunt of peoples' rage as parade-goers hurled open water bottles at them and kissed. JPAC member Heshie Freed confirmed that the protestors were paid to be there, and added that it was done to prevent yeshiva students, who normally protest at events, from being exposed to the homosexuality on display. “The rabbis said that the yeshiva boys shouldn’t come out for this because of what they would see at the parade," he said. Tensions were high as a fight broke out later on in the parade when the barricade protecting the group came down. Parade-goers swarmed in and reportedly a Jewish JPAC protestor punched a parade-goer, with a friend punching the Jewish man back.“It’s been a lot of confrontation,” Mr. Freed said. “Whenever you have emotions, you have a situation.”