'More US Jews back Clinton than any other candidate, yet are divided on Iran' 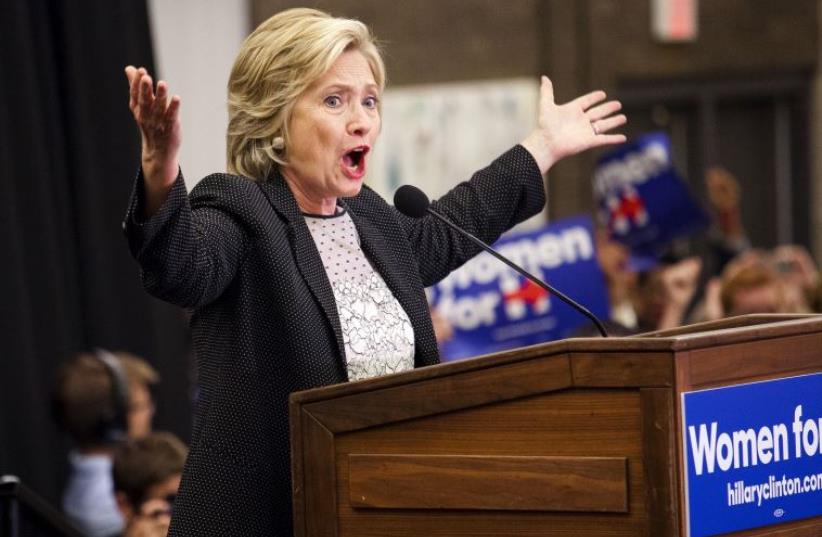 Democratic presidential candidate Hillary Clinton speaks at a "Women for Hillary" meeting in Milwaukee
(photo credit: REUTERS)
Advertisement
An American Jewish Committee poll found US Jews virtually split on the Iran nuclear deal and showed Hillary Rodham Clinton well ahead of the pack among preferred presidential candidates.The annual AJC poll published Friday showed 50.6 percent of respondents approved of the sanctions relief for nuclear restrictions deal reached in July between Iran and six major powers, and 47.2 percent disagreed with it.That’s a virtual tie, based on the 4.7 percent margin of error. The poll of 1,035 Jews was conducted by GfK between Aug. 7 and Aug. 22. Recent general population polling has showed support for the deal plummeting to the 20s.Asked about presidential candidates, 39.7 percent of respondents listed Clinton as their first choice, and Sen. Bernie Sanders, D-Vermont, who is vying with Clinton for the presidential nod, came in as a second choice, with 17.8 percent. Among Republicans, billionaire Donald Trump was in the lead, with 10.2 percent, followed by former Florida Gov. Jeb Bush, with 8.7 percent.The poll suggested gains for Republicans, who have struggled for years to top 30 percent among Jewish voters: Overall, Democratic candidates garnered 58.5 percent of support while Republicans added up to 37.4 percent.On the Iran deal, the AJC pollsters went for a straightforward question: “Recently, the US, along with five other countries, reached a deal on Iran’s nuclear program. Do you approve or disapprove of this agreement?”A range of other polls of US Jews on the Iran issue have been accused of bias because of questions that attempted to contextualize or explain the deal.In a follow-up question, the AJC respondents showed a lack of confidence in the ability of the deal to keep Iran from developing nuclear weapons. Those who replied “very confident” numbered just 4.9 percent, while “somewhat confident” were at 30.7 percent; The “not so confident” came in at 30.1 percent and the “not at all confident” were at 33.2 percent. Overall, that showed 35.6 percent expressing confidence in the deal and 64.3 percent expressing a lack of confidence.The White House and other backers of the deal have lobbied the Jewish community hard for its support, as have the deal’s opponents, including congressional Republicans, Prime Minister Benjamin Netanyahu and the American Israel Public Affairs Committee.Respondents were slightly likelier than not to believe that ties between the United States and Israel were strained. Asked if US-Israel ties were getting better or worse, 4.7 percent said “better” and 42.2 percent said they were the same, while 51.9 percent said they were worse.Respondents were culled from a pool of 55,000 people who had been asked through a system of random selection to participate in such surveys. They responded via email.Traditional pollsters prefer cold-calling, saying that self-selection - in this case, by agreeing to be part of a survey pool - inevitably skews results, leaving out respondents who might otherwise not have prepared themselves for polling. However, with the advent of cell phones, cold-call surveys have become for some groups prohibitively expensive, and an increasing number of polls are conducted through email among respondents who have expressed a willingness to be surveyed.