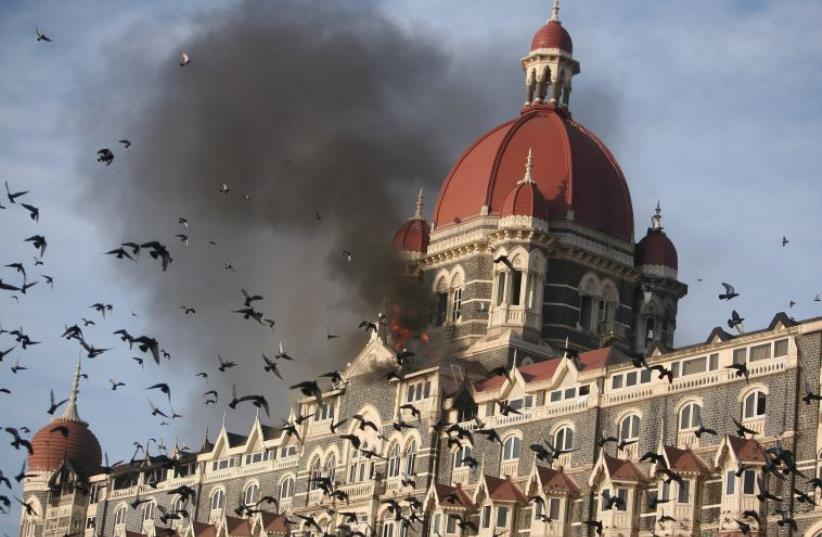 Pigeons fly near the burning Taj Mahal hotel in Mumbai November 27, 2008.
(photo credit: REUTERS)
Advertisement
A conspirator who helped design the 2008 Mumbai terror attack in which 164 people were killed, including six Jews and an Israeli citizen, told an Indian court Monday that the 10 gunmen who carried out attack received assistance from Pakistan's military intelligence agency [ISI], according to The New York Times.David C. Headly, who is of Pakistani-American heritage and is currently serving a 35-year prison sentence for an unrelated conviction, told the Indian court via teleconference that he was in contact with two ISI handlers throughout the planning stages of the attack and was paid to make reconnaissance trips to India.  Government prosecutors in India hoped to use Headly's testimony to draw a link between the Pakistani government and the 10 Islamic fundamentalist who carried out the attack in order to apply pressure on the latter to arrests other alleged collaborators.Several commanders of Lashkar-e-Taiba, the Pakistan-based terror organization believed responsible for the attack, are currently freed on bail or have yet to be charged with a crime, The Times added.Headly, 55, also revealed during his deposition that the 10 gunmen in the attacked had botched two previous terror attacks on the city, once in September and one in October of 2008. Headly, who was born Daood Gilani and changed it on the advice of one of his handlers in order to travel more freely throughout India, was the son of a Pakistani poet and diplomat Syed Saleem Gilani, and Philadelphia socialite A. Serrill Headley. He would later turn DEA informant after being convicted of heroin smuggling and be sent to Pakistan in order gather information on drug trafficking.It was there that Headly began his transformation into Islamic fundamentalist, where he would subsequently provide logistical support for the 10 gunmen in the 2008 attack.In 2009, Headly was caught carrying plans for an attack on a Danish newspaper and sentenced by an American court to life in prison. The court eventually reduced Headly's sentence to 35 years due to his work with the DEA, The Times noted.Gideon Goren contributed to this article.