The Boycott, Divestment, Sanctions movement has for years held events targeting Israel in facilities subsidized by the Munich Municipality. 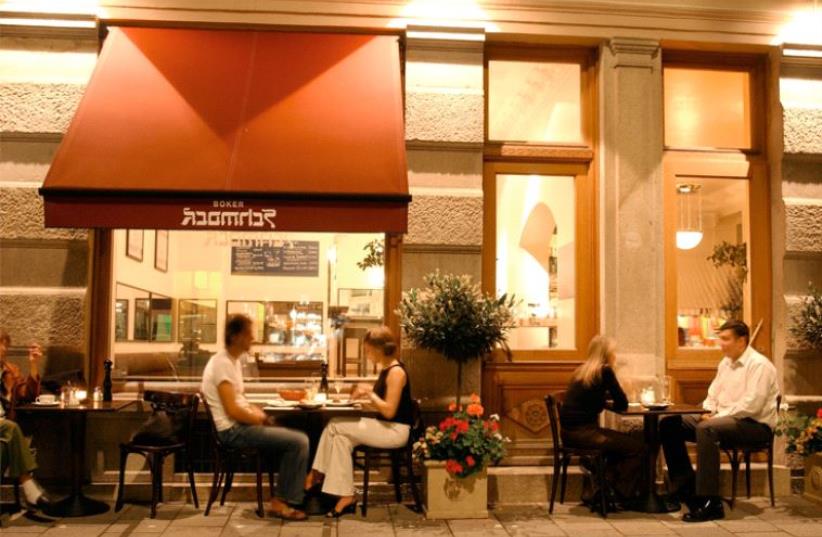 Schmock Munich restaurant
(photo credit: WWW.SCHMOCK-MUENCHEN.DE)
Advertisement
The Jewish owner of Munich’s Schmock Israeli restaurant announced on its website its closure after 16 years because of rising anti-Semitism in the Bavarian capital.Florian Gleibs pulled the plug on the restaurant last week because of the mushrooming anti-Israel agitation in the city since the IDF’s 2014 Operation Protective Edge against Hamas in the Gaza Strip.“People from the educated, well-off middle class have decided to hold me responsible as a representative of Israel, according to the motto: ‘What you people are doing is nothing different than what we Germans did back then [in the Holocaust],’” he told the daily Die Welt.In response to anti-Israel tirades, he placed a large sign in the restaurant’s window reading: “We are not involved with politics.” The hostility toward him and his restaurant continued, Die Welt reported.Gleibs, 45, is not Israeli. He attended a boarding school in Haifa for two years when he was younger.He told Die Welt he “sees antisemitism as more emotional now than before [the 2014 war].” Gleibs said he personally experienced “people on the streets screaming ‘Jew, Jew, cowardly swine, come here and fight alone.’” According to the Die Welt article, “antisemitism is, in truth, disguised as criticism of Israel.”Markus Schäfert, the spokesman for Bavaria’s domestic intelligence agency – the rough equivalent of the Shin Bet (Israel Security Agency) – said “anti-Zionist antisemitism pretends to criticize Israel but, in fact, rejects Israel’s existence.”The Boycott, Divestment, Sanctions movement for years held events targeting Israel in facilities subsidized by the Munich Municipality.Mayor Dieter Reiter has since late November 2015 canceled a series of BDS events in city-funded buildings.A talk that month by Christoph Glanz, a leading German BDS activist, in the city-funded Gasteig cultural center, triggered sharp criticism from the Jewish community and Israel’s consulate in Munich.Glanz is widely considered an anti-Semite. He said the allegation is “absurd.” He has commented positively about liquidating the Jewish state and relocating Israel to the southwestern German state of Baden-Württemberg.Charlotte Knobloch, the head of Munich’s Jewish community and a Holocaust survivor, sharply criticized the BDS event in the Gasteig. Knobloch took Glanz to task at the time for his hatred of Jews and Israel: “The BDS campaign disguises the socially unacceptable,” Knobloch, told The Jerusalem Post, adding, “It has modernized the Nazi slogan ‘Don’t buy from Jews!’ by demanding, ‘Don’t buy from the Jewish state.’” Gleibs plans to reopens Schmock as Laotian restaurant. He owns two additional eateries in Munich. His restaurant Meschugge will continue to serve some of the dishes from the now-defunct Schmock.