Synagogue in Freiburg, Germany, was destroyed during Kristallnacht in November 1938.

By TAMARA ZIEVE
SEPTEMBER 24, 2017 18:34
Demonstrators form human chain around the pool at the Square of the Old Synagogue in Freiburg, Germany on Sunday September 17, 2017.
(photo credit: FRANCOIS BLUM)
Advertisement
Dozens of activists formed a human chain on Sunday around the site of an old Nazi-destroyed synagogue in Freiburg, Germany, to protest its recent transformation into a recreational wading pool for the public.The Freiburg Synagogue was burned down during Kristallnacht on November 9 and 10, 1938, during which Nazis smashed windows and burned down Jewish businesses, homes and synagogues and killed dozens of Jewish residents throughout Germany.The issue of the site’s use came to the fore last autumn, when remains of the old synagogue were found during construction work to build a new plaza there.After discovering the city council’s intention to remove the synagogue’s old stones, activists petitioned the mayor to preserve them, but their efforts were in vain.“Some members of the city council were with us, but before we could organize a protest rally and before the city council had a new meeting, the city started to remove the old stones – on November 2nd and 3rd 2016 – just a few days before the 9th of November, the day on which the old synagogue was destroyed 78 years ago!” said Maren Stumke, a Freiburg resident who has been campaigning for the preservation of the historic site.“It was heartbreaking and a shock for us all – especially some older Jews who had survived the Holocaust and now had to watch the remains of the old synagogue being destroyed again.” 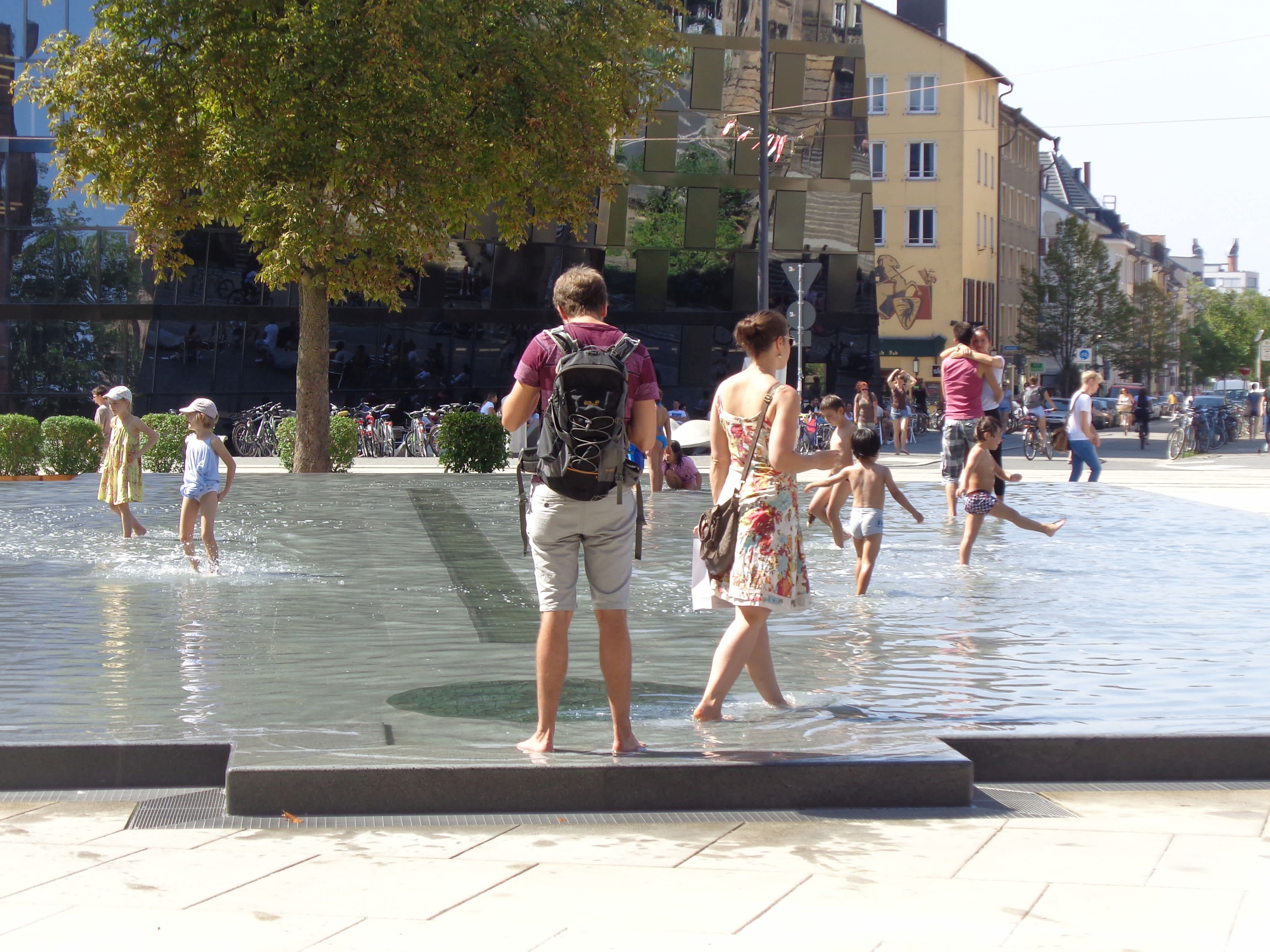 Passers-by bathing in the pool at the Square of the Old Synagogue in Freiburg, Germany on Sunday September 10, 2017.On November 10, 2016, some 100 people participated in a protest against the move, including descendants of Jews from Freiburg who escaped Nazi Germany and whose ancestors prayed in the old synagogue. But the council went ahead with its plans and any stones that disrupted the new building plans were removed. Stumke told The Jerusalem Post that the city assured protesters that a “dignified memorial” in the form a pool would stand on the site, retaining its size and shape of the former structure.But following the opening of the new square to the public on August 2, passersby quickly took advantage of the water as a place to cool off during the hot summer days.Incensed by scenes of the historic site being used as a wading pool, the protesters reorganized themselves and began forming silent human circles around the pool on Sundays. Among them is a 90-year-old survivor of the Leningrad Blockade. Demonstrators have also written to the mayor and to the media, demanding that the site be treated with respect and its history remembered.Mayor Dieter Salomon participated in a closed meeting of the city council last Monday and agreed, as requested by the Jewish community, that the square retain its name, “Square of the Old Synagogue.” Some council members had proposed that the square be renamed as the “Square of the Destroyed Synagogue,” but community members objected. They argued that the proposed name would put too much emphasis on the destruction caused by the Nazis rather than on the synagogue as a center of a vibrant Jewish community in the late 19th and early 20th centuries.The municipality decided to erect a sign at the site explaining its historic significance.“The city decided that a provisional explanatory sign will be placed on the memorial fountain at the square of the old synagogue. At the beginning of August, the new plaza of the old synagogue was inaugurated and since then was well accepted by the general public,” the mayor said in a statement.“In today’s meeting, the mayor informed the city council members that by the end October a provisional sign explaining the history will be posted next to the fountain at the plaza of the old synagogue,” the statement continued.“From many sides there was a request to exhibit signs at the memorial fountain so the history and background of the fountain would be understandable for visitors. The signs should therefore make [people] conscious of responsible conduct at the memorial place that was until now overlooked.”The statement also said that the signs would be formulated with the participation of the Jewish community over the next few months.Talks between the city and leaders of the Jewish community are scheduled for September 27. Jewish representatives see the agreement over the signs as a positive step, but are seeking a more prominent and permanent reminder of the destroyed synagogue.It is important to them that the site is officially named a memorial. Representatives are also proposing a new concept for the site, perhaps involving an additional structure incorporating those stones which were removed from the building of the old synagogue. François Blum, who serves as the spokesman for descendants of the members of the former Jewish community of Freiburg, has suggested that a Torah ark be built in the place where it used to stand. Stumke laments that the City Council has not included Blum in the talks "as the voice for the descendants." Other suggestions Blum shared with the Post include adding a list of names of all Freiburg residents who perished during the Holocaust, and restricting access to the pool "so that it is not used to "walk" on the memory and the soul of all those who have never had a chance to get a peaceful tombstone."Benjamin Weinthal contributed to this report