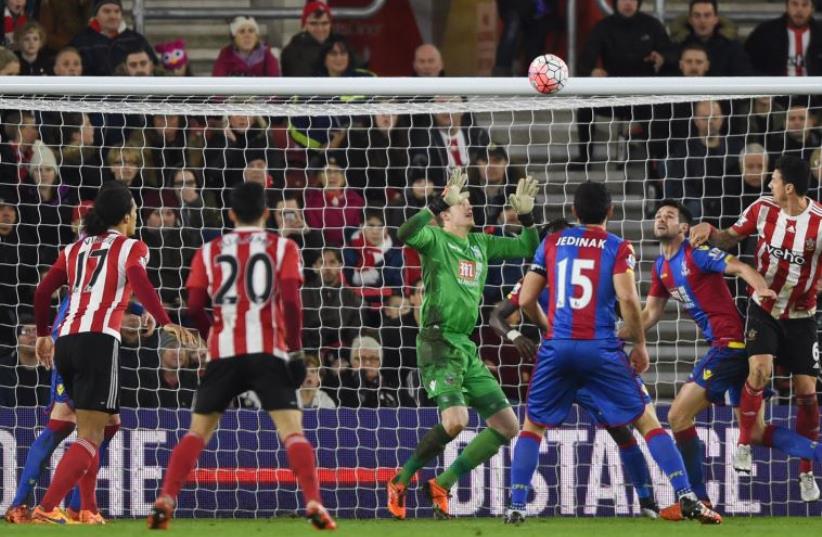 Southampton faces Crystal Palace in the FA Cup Third Round at St Mary's Stadium, January 9
(photo credit: REUTERS)
Advertisement
Two fans of the Southampton soccer club have been banned from attending English Premier League games for three years for making “fascist salutes” and “racist gestures” at Jewish fans during a recent match.Thomas Flynn, 22, and Michael Haydon, 23, pleaded guilty to using threatening, abusive and insulting behavior in a religiously-aggravated public order offense, the Daily Mail Online reported. The men were charged for their behavior at a Dec. 19 Premier League match between Southampton and the the Tottenham Hotspur.Haydon, who had been drinking since morning, and Flynn also reportedly made hissing sounds meant to resemble the sounds of Nazi gas chambers.
“There was a white male raising his right hand and finger below his nose and making hissing sounds imitating gas escaping,” prosecutor Charles Nightingale said a Jewish Hotspur fan reported, according to the Daily Mail Online.The two Jewish fans who reported the incident — one of whom said he had lost relatives in the Holocaust — also reported hearing chants of “gas the Jews.” Tottenham has traditionally had a large Jewish fanbase.Haydon’s lawyer said her client admitted to making the hissing sounds but not to the verbal abuse.“This is very out of character and a blip,” the lawyer, Jane Hiatt, said of Haydon. “He’s horrified and ashamed.”Judge Victoria Parker banned the two Southampton supporters from attending soccer matches in Britain or going near St Mary’s Stadium around match times. She also ordered them to show passports to police before attending games abroad and gave them fines and a curfew.
Advertisement
Subscribe for our daily newsletter