In letter to Croatian PM Milanovic, Dr. Efraim Zuroffblasted the disbursement of pensions to veterans of the Ustasha. 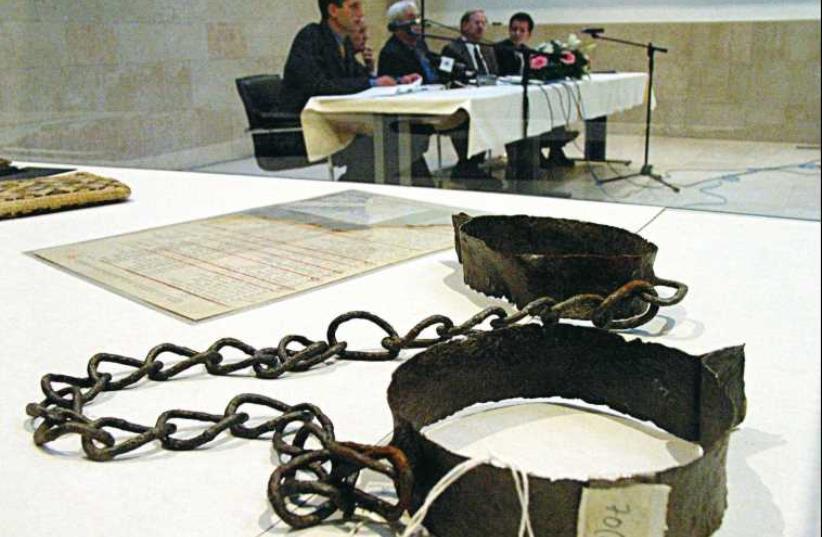 Original chains and manacles worn by inmates of World War II Jasenovac concentration camp displayed at Jasenovac, Croatia, in 2001.
(photo credit: REUTERS)
Advertisement
The Simon Wiesenthal Center harshly criticized the government of Croatia on Tuesday over payments the country is making to those described by the Jewish organization as former war criminals.In a letter to Croatian Prime Minister Zoran Milanovic, Dr. Efraim Zuroff, a Nazi hunter who heads the center’s Jerusalem office, blasted the disbursement of pensions to veterans of the Ustasha military force.Described by Yad Vashem as a “fascist, terrorist movement,” the Ustasha, which was fiercely anti-Semitic, administered a Croatian puppet state on behalf of the Germans during the Second World War. The group was responsible for the murders of over half a million Serbs and the majority of the country’s Jews.Out of forty thousand Jews in the independent state of Croatia, three quarters were murdered, twenty thousand by the Ustasha in Croatia with another ten thousand deported by the group to Auschwitz.“In view of the horrendous war crimes committed in the NDH [the Independent State of Croatia] by the Ustasha, we believe that such a policy is inherently mistaken, contrary to the principles of the Republic of Croatia and a horrific insult to the victims of the Ustasha, their families and all Croatians with a sense of morality and integrity,” Zuroff wrote to Milanovic regarding the pensions.“We therefore urge you to take the appropriate measures to change this policy as quickly as possible and spare Croatia the shame of rewarding those who were among the worst and most cruel perpetrators of World War II crimes with special rewards for their cruelty and moral blindness.”In reply to a request for comment, a spokesman for the Foreign Ministry of Croatia told The Jerusalem Post: “We cannot comment on the letter since it is not received yet, but Ustashi war criminals were not granted any special benefits.“We want also to draw your attention to the prime minister’s statement in Jasenovac a few weeks ago: ‘Partisans were the only Croatian army in the Second World War,’” the Foreign Ministry told the Post.