Nazi looted artwork stolen from Jews set to be displayed in Germany, Switzerland

The curators of the exhibitions aim to achieve greater transparency regarding the search for rightful heirs to any of the works. 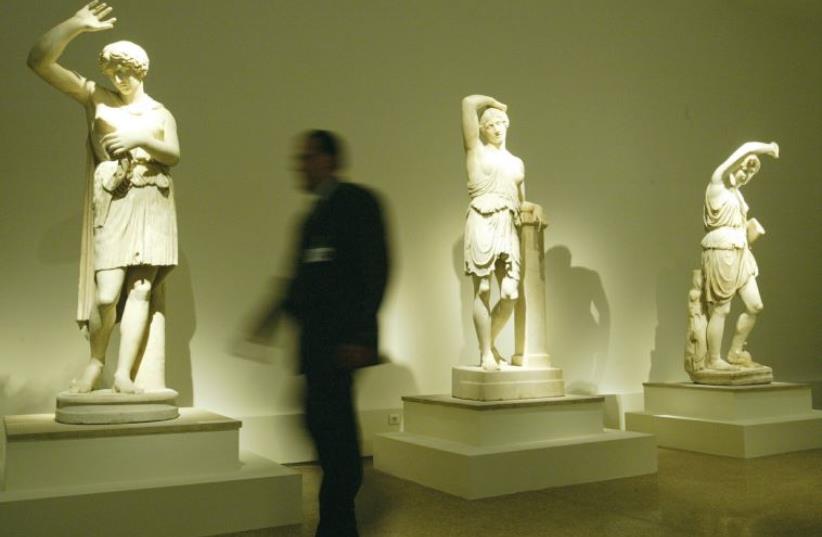 A guard walks past statues of wounded Amazones, made between 400 and 350 BCE, at the National Archeological Museum in Athens
(photo credit: REUTERS)
Advertisement
The controversial Gurlitt art collection, thought to contain works looted from Jews and museums during World War II, will go on display next winter in two museums – one in Germany, the other in Switzerland.The aim of the exhibition is to help clear up provenance questions in the collection of the late Cornelius Gurlitt of Munich, according to the Bundeskunsthalle museum in Bonn, Germany, and the Kunstmuseum Bern in Switzerland.German tax investigators found Gurlitt’s huge stash of artworks in 2012. His father, the art collector Hildebrand Gurlitt, had been hired by the Nazis to buy art for its museums or to sell for profit. The find was kept under wraps for a year, until the German investigative magazine Focus broke the story.Since then, a task force has been investigating the provenance of the more than 1,000 works in the collection, which include paintings by Matisse, Picasso, Chagall, Beckmann, Liebermann and others. So far,  two works have been returned to the heirs of the original owners.Cornelius Gurlitt died in 2014 and left the collection exclusively to the Art Museum Bern Foundation in Switzerland. The museum said it would abide by the younger Gurlitt’s pledge to return all works identified as having been “stolen or robbed” by the Nazis.According to news reports, selected paintings will be shown in the two museums. The curators aim to achieve greater transparency regarding the search for rightful heirs to any of the works, according to a joint statement from the two museums issued on Monday. The works will be accompanied by texts explaining what is known about their history.In particular, the exhibition in Bonn will focus on gathering additional clues regarding paintings whose provenance remainsmysterious.Ronald Lauder, head of the World Jewish Congress, has been critical of the pace of research by the German task force. In January, he criticized the researchers for their “persistent lack of transparency and communication.”The curators of the upcoming twin shows are considering whether they could be shown later at other venues, including Berlin’sMartin-Gropius-Bau in 2017.